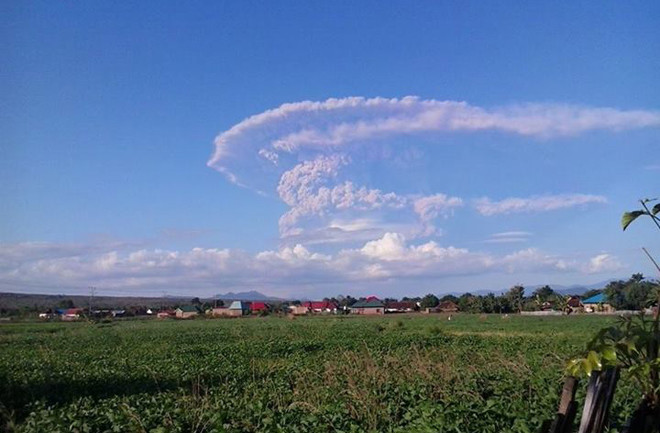 The eruption column at Sangeang Api, seen on May 30, 2014. Image: Vira Azzukhruf, used by permission. New reports from Indonesia tell of an sizable explosive eruption that occurred today at Sangeang Api (see above). These news reports suggest ash falling upwards of 30 km from the volcano with a 3 km (10,000 foot) ash plume while the Darwin VAAC warning of the eruption lists ash spotted by pilots as high as 20-50 km (65,000-164,000 feet) as the ash drifts to the southeast. Now, these plume heights are wildly different and some of the images on Twitter suggest the plume is on the closer to the 20 km than 3 km height, but hopefully forthcoming reports will make the actual height clearer to understand. UPDATE (8:30 AM EDT): Here is a great image of the start of the eruption, with the plume rising rapidly. The only evacuation orders so far are for people within 1.5 km from the volcano, but luckily no one lives on the island -- however, there are many agricultural fields on the small island, so people have been warned to stay away. Apparently seismicity (or explosive shockwaves?) related to the eruption was felt across the city of Bima and nearby Flores as well, suggesting that this is a large explosive event. This explosive eruption would be the first one at Sangeang Api since the volcano's 1997-99 eruptive period. Looking through its eruptive history, Sangeang Api has produced numerous VEI 2-3 explosive eruptions over the past century. A dome occupies the main crater of the volcano, but only weak steam plumes (~10 meters) and a mix of deep and shallow seismicity have been recorded at the volcano over the past few years. I will try to update this post as the news rolls in.