Excerpts from The Mad Scientist's Handbook: The Human Recipe

If you wish to make a human being from scratch… 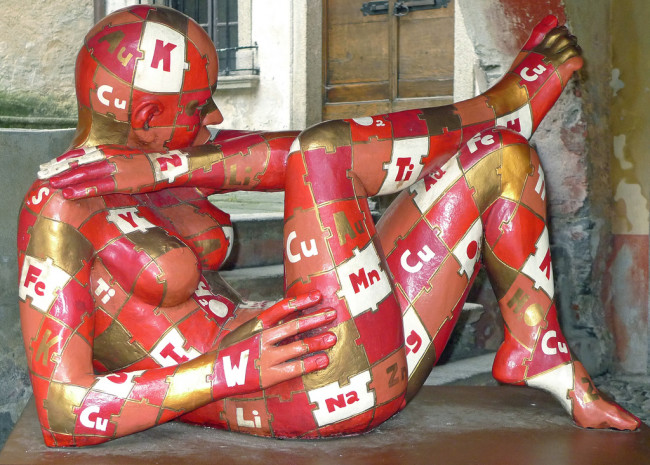 Start with enough oxygen to fill a freight container. Then add an amount of hydrogen that fills 4,700 party balloons. Find enough carbon to load up a water softener and add that too. Throw in a pinch of calcium, phosphorus, and potassium. Sprinkle in some copper, iodine, and chromium. Mix with evolution and wait a few billion years. That’s the recipe for you—what universe threw into a biological cauldron like a witch and produced, maybe cackling as it did so. But cosmic time is too long to wait. With a top-of-the-line atom reassembler, the resourceful mad scientist can create an army of human drones overnight. The recipe for a human doesn’t fill up a shopping list as you may suspect. Just twenty-two elements can describe almost all of the molecules that are, at this moment, you. Not only do we know what elements go into the recipe, we know how much to add. The human recipe* is excerpted from the textbook Ecological Stoichiometry

: The Biology of Elements from Molecules to the Biosphere:

This formula is based on its smallest component. For every one atom of Cobalt, for example, there are 132,000,000 oxygen atoms. But it’s a long way from atoms to a human. Stoichiometry can get us there. Stoichiometry is the chemist’s way of calculating chemical components based on a common unit—the mole. A mole is defined as the amount of any substance that contains as many atoms, molecules, or ions as there are atoms in 12 grams of pure carbon-12. In this amount of carbon, there are 6.02*10^23 atoms. And as the atomic weights

of all the elements are based on carbon, if you have the same amount of an element as its atomic weight, you have one mole of that element. So, 23 grams of sodium would be one mole of sodium and four grams of helium would be one mole of helium, for example. Stoichiometry works for molecules as well. For example, because hydrogen has an atomic weight of one and oxygen has an atomic weight of 16, one mole of water—H2O—weighs 18 grams (and has 6.02*10^23 molecules). Now, knowing that a human has about one milligram of cobalt in the body, the successful mad scientist can use the human recipe and stoichiometry to find out how much of each element is needed. One milligram of cobalt contains 10,000,000,000,000,000,000 atoms. And the human recipe says that there are 375,000,000 times as many hydrogen atoms in the body as that. Using moles and atomic weights, the math says there are 6.41 kilograms of hydrogen. The same process can be done for all the 22 elements. The human recipe contains:

Of course, any good mad scientist/witch double-checks the results. Add all the amounts from the human recipe together and you get 62 kilograms. Guess what the average weight for a human adult

is? 62 kilograms! As they say, "measure twice, vaporize

once." With a few covert trips to a university chemistry lab or some phone calls to a black-market chemical supplier, you could have at your doorstep almost every single atom that makes humans what they are. You could then throw it all into a bubbling cauldron, like the universe did, but nothing would happen. Though we know all the ingredients, reassembly is the most important part of the drone army making process. It has to be perfect. The Mad Scientist's Handbook suggests obtaining and modifying contraband transporters from Starfleet

for this purpose. Because when you get atomic reassembly wrong, you could end up with an evil, goatee-wearing version of your human

. After all, as goody-two-shoes astronomer Carl Sagan once said (or “sung”

), “the beauty of a living thing is not the atoms that go into it, but the way those atoms are put together” (surely by "beauty", Sagan meant usefulness as an expendable test subject). Humans are, in fact, that list of atoms above. But humans are so much more, more than the dust of a dead star. Human atoms are the notes, their life the symphony. And an army of humans reassembled from easy-to-find elements can be your mad crescendo. -- Book Reference: Ecological Stoichiometry

: The Biology of Elements from Molecules to the BiosphereImage Credit: One item from an exhibition of public art

staged around the streets and public spaces in Orta San Guilio. Taken by Xerones

on Flickr and under a Creative Commons 2.0 license. *Sent to me by your friendly neighborhood entomologist Phil Torres