Evolution of the Universe Revealed in Computer Simulation 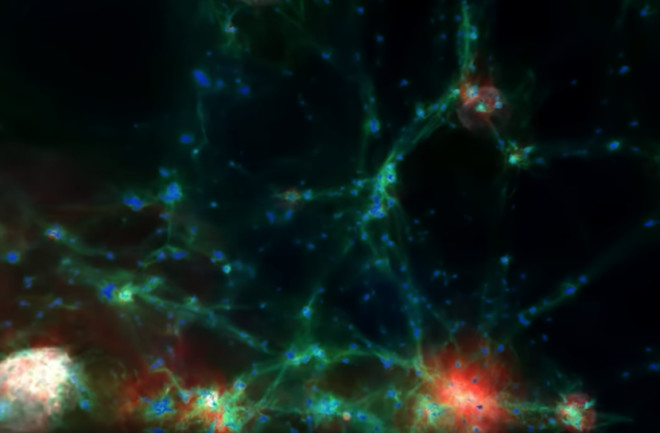 Grab some popcorn, turn on some Pink Floyd, and prepare to have your mind blown. Astronomers have created the most advanced simulation to date of the evolution of the universe over billions of years. The simulation, called the Illustris, begins just 12 million years after the Big Bang and illustrates the formation of stars, heavy elements, galaxies, exploding supernovae and dark matter over the 14 billion years since. The simulation encapsulates the universe in a cube roughly 350 million light years on each side. The powerful simulation was presented in a paper published in the journal Nature.

In order to capture the history of the universe in a box, you need a lot of computing power. Astronomers dedicated five years to programming Illustris, and it took 8,000 CPUs running in unison three months to crunch all the numbers that the model is based on, according to the Illustris website. It would have taken an average desktop computer over 2,000 years to complete the calculations.

Previous simulations, limited by computing power, either focused on a very small corner of the universe or displayed results in low resolution. Researchers can use the tool to study cosmic phenomena, such as galaxy formation, at specific points in the history of the universe. And just like the actual universe, developers say there are still many areas of the simulated universe that remain unexplored as they continue to investigate its results.