Evolution is the coin of the realm

Can you imagine the United States issuing a coin like this? 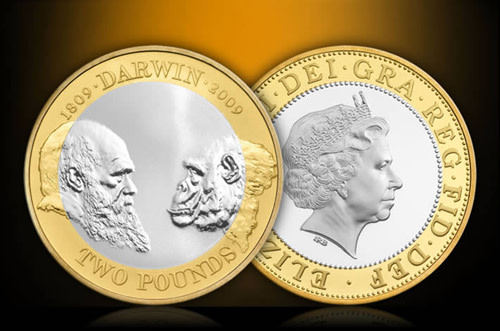 Sigh. Yeah, me neither. This is a special issue £2 coin from the UK, which came out in 2009 commemorating the 200th anniversary of Darwin's birth (and the 150th of the publishing of Origin of Species). I missed this somehow, which is too bad. Wish I had picked one up when I was over there for TAM London! I would love to live in a country where science and scientists enjoy this sort of celebration, instead of being attacked by their own government because they won't toe an ideological fantasy-based line. Poland has used to have Copernicus on their money. Copernicus! I'd love to see a Feynman quarter, or an Einstein dollar coin. If something like inspired a kid to look at it and think, I wonder who that is and why they're on a coin, then it would be worth it.