I have a morality tale to tell here, but first we have to do some science. The science is part of the moral, and it's actually rather surprising and cool. And it was reading about the science that made me chuckle, because the moral to me -- as a scientist myself -- was pretty obvious, but I know to others it will be as opaque as black hole. Speaking of which... We know that at the heart of every big galaxy lies a supermassive black hole. There's one at the center of our galaxy -- tipping the cosmic scale at 4 million times the mass of the Sun! -- and one in Andromeda. In fact, looking for these monsters* was one of the key missions for building and launching the Hubble Space Telescope, a mission it had great success with. 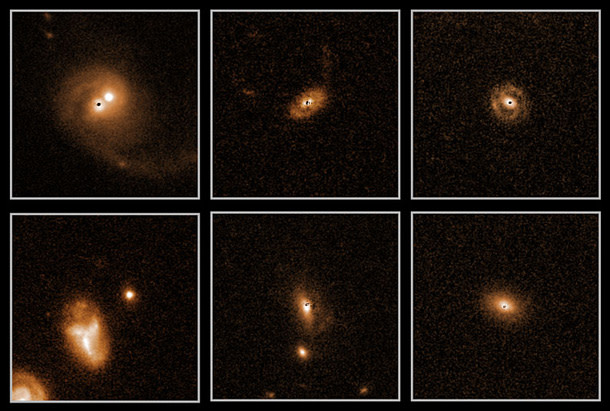 Why those black holes are there, and so huge, is a matter of some discussion. We're pretty sure they formed at the same time as their host galaxies themselves, and in fact helped the galaxies grow at the same time the galaxies fed the black holes material. We also know that big galaxies like our Milky Way grew to their current enormous size by literally colliding with and eating other galaxies. This would inevitably lead to the doomed smaller galaxy's black hole falling to the center of our galaxy, where the insatiable black hole already there would merge with it, growing bigger. When this happens, so it's thought, matter in the form of gas, dust, and stars would also fall into the center, feeding the black hole. The matter can pile up outside the hole and get incredibly hot -- observations indicate it can reach many millions of degrees, blasting out light in the form of X-rays. Galaxies like these are called active, and we see them everywhere. And many of these active galaxies are weirdly shaped, distorted, indicating they may have recently undergone a big collision. Aha! That fits the idea that colliding galaxies feed black holes and make them active. There have been so many observations of this that it has matured to become the standard assumption: most active galaxies have recently collided with another galaxy, dumping material into the core and triggering an outburst. I can't tell you how many papers I've read about this, especially when I was working on the public outreach for the Fermi satellite, which was designed to look at active galaxies. It's a good story. The problem is, it looks like it's wrong. Astronomers using a fleet of telescopes observed over 1400 galaxies of all types, about 10% of which were classified as active. Looking at the shapes of the active galaxies (as well as the non-active ones as a control group -- in that way, this was similar to a double-blind medical research study), they found that there is little or no connection between active galaxies and collisions/mergers. This is stunning news! It goes against the paradigm that has been years, decades in the making. It's not unbelievable, and by that I mean it doesn't rely on weird assumptions or new science or anything like that. Something else must be making these galaxies active; perhaps instabilities inside them, or internal gas cloud collisions, or some other phenomenon. But apparently, at least for the past 8 billion years, it's not due to collisions on a galactic scale. Mergers don't feed the supermassive black holes and make them active in the way everyone assumed. I imagine this will be a topic of much debate at the upcoming American Astronomical Society meeting in Seattle this week. But in the end, if the observations hold up, and the conclusions are sound, a remarkable thing will happen: it will be accepted. Scientists will see that their assumptions were wrong, or at least need to be modified, and there will be a shift in the way astronomy of active galaxies is done. Perhaps there's more to this story, perhaps more observations are needed, perhaps different populations of galaxies need to be studied. But if it holds up, scientists will change their minds. And that is why this is a morality tale. When scientists see better data, when the evidence is weighed, they can change their minds! This, despite claims from antiscientists of all stripes -- homeopaths, antivaxxers, alt-medders, and so on -- who claim scientists are too entrenched and too protective of the status quo (this is a standard trope in their claims). And there's another moral, too: scientists do indeed actively engage with and try to overturn the status quo if they perceive it as wrong. Or, if they test it just to check it and find out it's wrong, boom! They publish. Again, a lot of antiscience advocates say that scientists are too scared for their funding to overturn the mainstream thinking, but that's utter baloney. They do it, and they do it a lot. They revel in it. You should hear the arguments that go on at colloquia and meetings! That, to me, is what I was saying is obvious. Of course there are personal stakes and egos here, and it can be hard to let go of a hypothesis. Scientists are people. But by and large they're people who see that what they are doing is bigger than themselves, bigger even than the specific research they're doing. What they're trying to do is codify the Universe itself! We can believe in all sorts of things, but that doesn't make them true. Science is a way of marking that boundary. And it takes nothing away from the wonder -- after all we're studying galaxies, and galaxies that collide; we're studying black holes and streams of trillions of tons of gas plunging into their waiting maws. When I look out at the sky, I see all sorts of amazing and wonderful things, and the best part is that because of science, I know they're real.

^* I know, this is a morality tale, not a fairy tale, but that doesn't mean it can't have monsters too. 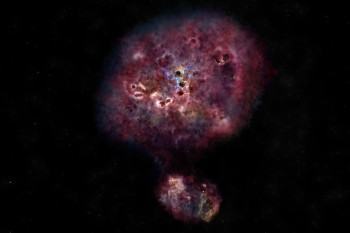 The SciencesThis Huge, Distant Galaxy Formed All Its Stars Superfast

The SciencesThe Greatest Discoveries from the Spitzer Space Telescope