Everything You Didn’t Want to Know About Cockroaches

Amongst its many epicurean, architectural and otherwise louche charms, New Orleans has another infamous, uncelebrated one: a problematically vibrant cockroach population. Every summer (oh, let’s be honest here: they’re here spring, summer and fall), the German brown cockroach can be seen snatching its way around your house, flitting on sidewalks at dusk, and intimidating the locals.

They fly down here in the Deep South, did you know?

One Saturday night back in August, one such creature dive-bombed into my cleavage. After one spilled G&T (Oh God, not my drink!) and many sputtered expletives, the critter was ousted and a friend graciously stomped it into a unrecognizable smear into the pavement.

And so with the impending cockroach population explosion coming any summer day now, I figure why not have a chat about what diseases they can harbor and spread on your tabletops. Hmmm? And lest you think that this article is a paean extolling their overlooked virtues – alas! – they really are as filthy as everyone thinks they are

A colored scanning electron micrograph of Periplanta americana, the American cockroach, one of the smallest known species. Note the ubiquitous hairs covering the insect, allowing for microbes to be picked up during its feedings. Image: Dr. Biology, Arizona Board of Regents. Click for source.

I’ll try to make this as painless as possible.

Out of the 4000 species of cockroach that exist, there are three major species that plague humanity – Periplaneta americana, Blattella germanica and Blattella orientalis. They feed on just about anything, even their deceased brethren, but they do have a sweet tooth and prefer to eat sugary and starchy items such as sweets, cardboard and book-bindings (1). Included in their rather diverse diet is their consumption of human detritus such as feces, sputum, toe nails, and bodily residue on surgical swabs.

These unseemly dietary choices lead to their contamination of food, utensils and surfaces for food prep and have direct consequences on human health in three interrelated ways – their arbitrary feeding habits, eating both human excrement and human food; their indiscriminate defecation habits; and the fact that they regurgitate digestive fluids in the process of eating (2). Endearing, no?

Roaches also serve as an important source of infectious pathogens. They serve as a sort of public transit for the busy microbiological world, a bus ferrying bacteria, viruses, fungi and parasites between filth and human comestibles; really, every buggy imaginable rides on this double-decker of an arthropod. Bacteria and viruses settle into the crevices and cracks between thorax and head, and begin to multiply. There are so many fissures and clefts and crannies on a cockroach. Everywhere there are hairs, but especially on the six legs that escort these scuttling creatures from one dark, humid hideaway to another. Microbes snatch a ride on these hairs or are accidentally consumed by the cockroach only to pass into the alimentary canal where they may multiple in number. In one study, the bacterium Pseudomonas aeruginosa was found to have increased multiple-fold over the course of 114 days in the gut of a cockroach (3). 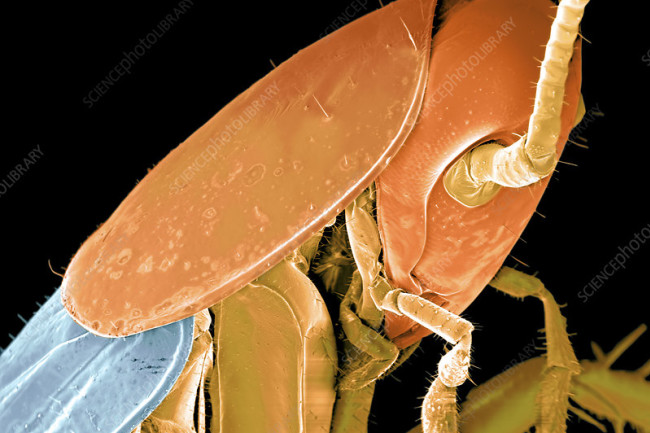 Colored scanning electron micrograph (SEM) of Blattella germanica, the German cockroach, one of the smallest known species. This roach’s long antennae can be seen protruding from its head and its wings (blue) can be seen at lower left. The anatomy of the cockroach provides several areas for bacteria, viruses and parasitic eggs/cysts to settle into. Image: Volker Steger, Science Photo Library. Click for source.

In this regard, roaches are not so much vectors as they are reservoirs; a mosquito will squelch its proboscis in your ankle, inoculating you with malaria in their quest for blood but a cockroach indiscriminately contaminates anything lying around. Entomologists describe this process as “mechanical transmission”, indirectly transmitting disease to humans.

All types of passengers are welcome on this cockroach bus. Over 30 species of bacteria have been found on the cuticle and gut of roaches, including those of serious medical import such as E. coli, various species of Salmonella and Staphylcoccous, Pseudomonas aeruginosa and Klebsiella pneumoniae (4). These bacteria cause diseases such as urinary tract infections, dysentery, diarrhea, pneumonia, cholera, polio, septicemia and wound infections (5). One study that trapped cockroaches in order to measure their bacterial load found that number was as high as 14 million microbes found on the exterior of the bodies, and 7 million in their fecal droppings (5).

Viable eggs and dormant cysts of parasites also hitch a ride; the culprits include the ova of Ascaris lumbricoides (giant roundworm), Anchylostoma deodunale (hookworm), Trichuris trichura (whipworm), Enterobius vermicularis (pinworm) and Strongyloides stercoralis (threadworm), and the cysts of Entomoeba hystolitica, Balantidium coli, C. parvum, C. cayetenensis and Isospora belli (4). Even the virus that causes polio, poliomyelitis, has been found within the guts of cockroaches (6).

There are several documented cases of small outbreaks that pinpoint to cockroaches playing an indirect but prominent role in disease transmission. In one county in Northern Ireland in the late 1970s, fifteen food-handlers in various establishments fell ill to dysentery caused by the Shigella bacterium over the course of eight weeks (2). These restaurants had serious infestations, particularly in the kitchen and dining areas, and the stomach contents of trapped roaches showed viable Shigella dysenteriae serotype 7 bacteria, incriminating the arthropods in the spread of the disease.

Cockroaches were also suspected to be the cause of a hepatitis A outbreak in a Los Angeles housing project in the late 1950s. From 1956 to 1959, the Carmelitos Housing Project represented 39% of all cases of hepatitis A in Los Angeles County with numbers of the infected steadily increasing through the years (7). It was only until a full-scale cockroach control program employing a newly developed insecticide, the industrial silica aerogel Dri-Die 67, was the outbreak halted. Two years following the program, incidences of hepatitis A from the Housing Project dropped to 0.0% and cockroaches traversing between the sewage system and the Project were pinpointed as the source of the epidemic. 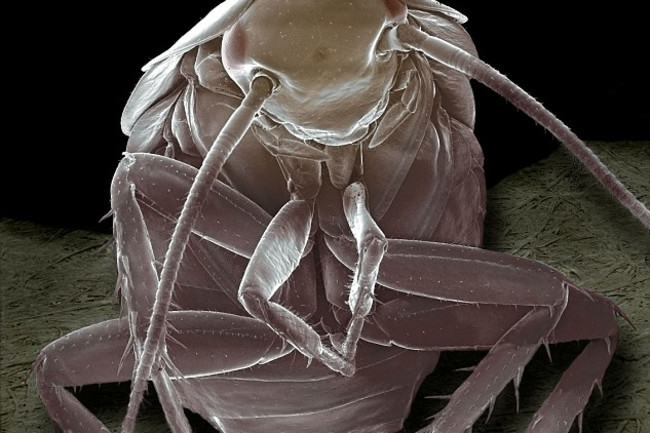 A colored scanning electron micrograph close-up of Periplaneta americana, the American cockroach, which can be found around the world. Image: Stephen Gschmeissner. Click for source.

Typhoid patients in Italy were found to have cockroaches harboring S. typhiin their homes in a study conducted in 1943 (2). Similarly, the same organism was found in cockroaches infesting a Belgian hospital’s children’s ward undergoing an epidemic of gastroenteritis in 1950 (2). Most recently, outbreaks of Klebsiella pneumoniae in neonatal units have been tied to cockroach infestations in hospitals in Ethiopia and South Africa (8)(9). These studies indicate that cockroaches may play an unappreciated role in the epidemiology of infections in both the home and hospital.

Though it’s difficult to say what part roaches play in small disease outbreaks, they are capable of harboring antibiotic-resistant bacteria. A 2012 study in Ethiopia looked at cockroaches trapped in a neonatal intensive care unit and found widespread multi-drug resistance among individual species of bacteria residing in the roaches. Reading the lists of antibiotics these bacteria were found to be resistant to is like a “who’s who” of the antibiotic world – ampicillin, augmentin, tetracycline, chloramphenicol, amoxicillin, doxycycline, and ciprofloxacin (8). An earlier study in South Korea found that cockroaches trapped in homes located 3 miles from a hospital harbored bacteria that were resistant to anywhere from 6 to 12 commonly used antibiotics (3). These medications are the mainstay for treating bacterial infections and the discovery that cockroaches in hospitals harbor bacteria no longer susceptible to them is discomfiting to say the least.

Bugs are such an inescapable component of our day-to-day living, whether we care to acknowledge them or not. They live their own buggy lives, spinning webs, squirming through our compost or draining picoliters of our blood. We pay little attention to them until they inconvenience us and spoil our clean, bleached perception of the world.

Cockroaches are especially gifted at this. They are the boldest creepy-crawlies, not only daring to openly traverse our homes and personal spaces but thriving in those environments. They need us for the waste and shelter we provide, and for that we despise them. And, sadly, the public opinion of them isn’t wrong. They really are gross – they serve as an efficient means for microbes of all kinds to traverse between sites of human waste and food preparation and consumption. Their traipsing through family dwellings, food establishments and hospitals compromises public health and may also contribute to the ongoing antibiotic-resistance in bacteria worldwide.

Check out the Resources below to see how you can prevent buggies and bacteria from getting a free ride into your kitchen. In the meantime, happy hunting!

The most recent cockroach-related outbreaks of disease have happened in developing countries that may lack adequate municipal sanitation and regular garbage disposal. Hospitals and multi-family dwellings that rely on old buildings may also suffer cockroach infestations due to shoddy construction or inevitable decay (3)(10). The WHO has a very helpful, fact-filled PDF here on how to protect your home from these little invaders.

Really wanna get in deep with Blattella germanica, the German cockroach? For only $326, this book could be yours. What a deal!  If you’re just into skimming, then you can check it out on Google here.

Cockroaches can dirty up human spaces but at least they have little friends that can keep their own bodies clean – mites!

From the ignominious Daily Mail, a collection of scanning electron micrograph images of the buggies that live in your home with you. More images can be found here but they’re sadly unlabeled.