Everyone Stop Freaking Out Over Italy's Supervolcano 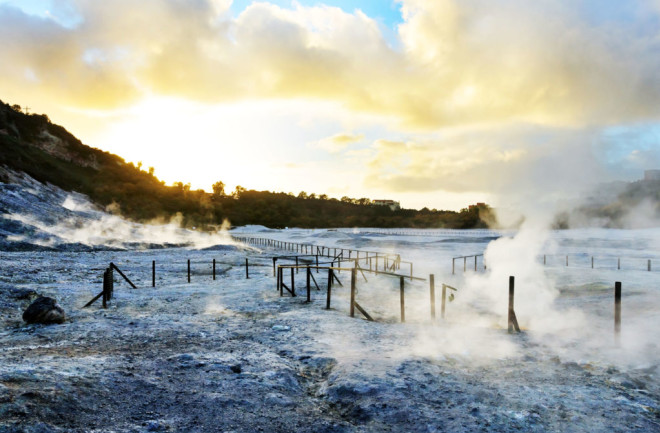 The Solfatara of Pozzuoli is one of forty volcanoes that make up the Campi Flegrei.Getty Images Yellowstone used to be the favored target of media volcano panic, but now it looks like Italy's Campi Flegrei has taken that crown for itself. A recent study published in Nature Communications is the latest impetus for headlines like "Italian Supervolcano Might Be on the Verge of Exploding" or "European supervolcano Campi Flegrei 'could be close to devastating eruption" or "

These make it sound like we're in for a massive eruption that will forever change the global landscape. But when it comes down to the science of the Campi Flegrei, we aren't even close. Before I dive into the new study, let's talk a little bit about the Campi Flegrei. As I mentioned in my countdown of the "most dangerous" volcanoes on the planet, it might actually deserve some of its foreboding reputation. Now, this isn't because there are signs an eruption will happen tomorrow, but rather because it's located in an area of high population (the Bay of Naples in Italy, population >6 million) and it has a history of nasty eruptions. However, its most recent eruption, in 1538, was relatively small and produced a cinder cone called Monte Nuovo. An eruption in 1198 from the Solfatara was likely a steam-driven explosion from the hydrothermal system. Neither of the most recent eruptions came anywhere close to the two massive eruptions that the caldera has produced: the Campanian Ignimbrite (~36,000 years ago and possibly over 200 cubic kilometers of volcanic debris) and the Neopolitan Yellow Tuff (~15,000 years ago and ~40 cubic kilometers). If an eruption of either of those scales occurred today from the Campi Flegrei, it would be devastating to Europe, burying much of the Bay of Naples region in meters of volcanic debris while sending ash across the continent. However, these are rare events in the overall history of the caldera, so we shouldn't be jumping to the conclusion that unrest is leading to anything close to these eruptions. [related/] So, why is everybody concerned now? This study by geophysicist Christopher Kilburn and others in Nature Communications is an attempt to change how we think about the signs of a potential new eruption at the Campi Flegrei. Since the early 1950s, there have been three periods of unrest in the caldera, defined by uplift of the Earth's surface and earthquake swarms. These events are normally attributed to little bodies of magma intruding about 3 kilometers beneath our feet. The unrest since 1970 has been pinned on about 0.03 cubic kilometers of new magma squeezing into the crust (the 1538 eruption, for comparison, released ~0.1 cubic kilometers of lava and debris). These bouts of unrest have traditionally been interpreted as discrete movements of new magma under the volcano, so as the land rose and earthquakes occurred, magma was injected. Then the uplift stopped, earthquakes subsided and the event was over with no eruption. The magma bodies are small enough that they would cool to solid in a few years. Everything was back to normal. This is par for the course when it comes to "restless calderas." But Kilburn and others present a new model that treats all this unrest since 1950 as a continuous event rather than discrete events. This means that as the rocks of the crust start to deform (and break) due to new magma injections, that stress accumulates. At first, the crust will behave like a plastic and stretch when new magma is added. But add enough magma in a short enough timespan---say decades to a century---and the crust stops being so pliable. Instead, it will break, potentially allowing the magma to find a path to the surface and cause an eruption. Many times, volcanologists look for massive surface changes as a sign of an impending eruption. This is what happened in the 1980 eruption of Mount St. Helens: The volcano grew an enormous bulge from accumulating magma. But Kilburn and others think that large deformations aren't the only signs of an eruption to come; you might only see a small uplift, but accumulated stress can cause the crust to "snap." They point to new data from drilling into the Campi Flegrei showing that stress is accumulating in the crust. This could mean that any more unrest---that is, new magma---could push the rocks over a threshold where they will break and an eruption will happen. The tricky part here is interpreting what kind of an eruption it might be. Most likely, it would look similar to the 1538 eruption of Monte Nuovo or possibly like the 1994 eruption of Rabaul in Papua New Guinea, another caldera that the authors say behaves like Campi Flegrei might. Neither of those eruptions were massive, but they did wreak havoc on the local communities near the volcano. So, if we don't need as much uplift and seismicity before such as eruption, people who monitor the caldera need to be very careful when they look at signs of unrest. And for the large population living in and around the Campi Flegrei caldera, knowing when to be prepared to leave will be vital. The last 70 years of unrest, unpunctuated by an actual eruption, means that people could be desensitized to the real hazards of volcanic activity. If the signs of unrest before an eruption are more subtle than what volcanologists and local residents assume will happen, then an eruption could cause more damage as people are left unprepared. This all being said, this study is just that: a study. It doesn't really change the state of the Campi Flegrei. What it does is propose a model that suggests that the signs of a new eruption might be more subtle than we think. The crust could be approaching a state where new injections of magma will lead to eruption. However, this singular study does not say that the next bout of unrest will lead to a eruption. It does not say the eruption will be a massive, devastating explosive eruption. It doesn't even really say that the area of the Campi Flegrei is in any more peril than ever. It just offers a new way to look at data from the volcano so that we might be better prepared for that next eruption at one of the planet's most dangerous volcanoes. [related_video wide-card="true" post_id="2036559"/]