A violent quasar reveals a mystery lurking at its center, thanks to high-resolution images that were never before possible. 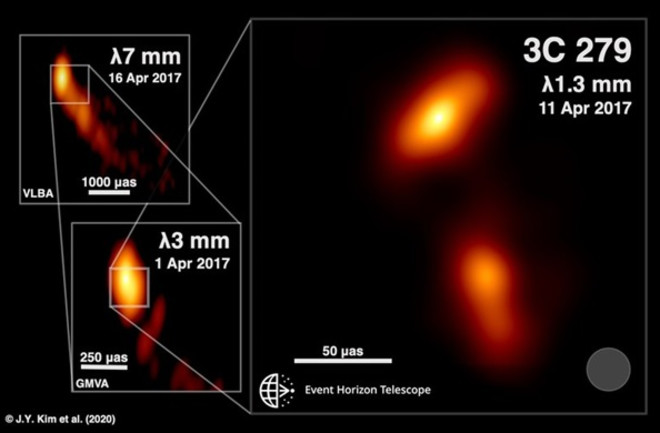 The Event Horizon Telescope zoomed in on the jet spewing from the quasar 3C 279 in finer detail than ever before (right), blowing previous observations (left) out of the water. The new image revealed something unexpected: a feature perpendicular to the jet, which hints there may be complex forces at play. (Credit: J.Y. Kim (MPIfR), Boston University Blazar program, and the EHT Collaboration)

It’s been about a year since the Event Horizon Telescope (EHT) Collaboration released the first image of a black hole. That groundbreaking snapshot featured the supermassive black hole at the center of M87, a massive elliptical galaxy 55 million light-years from Earth.

Now, the EHT Collaboration has released a new image, which shows a jet shooting from the nearly 1-billion-solar-mass black hole 3C 279, located about 5 billion light-years away. The results associated with the image were published today in Astronomy & Astrophysics.

At the heart of almost every galaxy lies a supermassive black hole. Sometimes those black holes are quiescent, like the one at the center of our Milky Way. But sometimes those black holes are violently active, and 3C 279 is in the latter category. 3C 279 is what astronomers call a blazar — an actively feeding supermassive black hole shooting out a powerful jet very nearly pointed straight at Earth. The new EHT image shows the black hole's jet, which is generated extremely close to the black hole itself, down to a resolution better than half a light-year. With such an an unprecedented, up-close view, astronomers spotted something unusual about the jet. Instead of seeing it shoot straight out from the region around the black hole, which the team expected, the base of the jet appears twisted or kinked, with glowing features extending perpendicular to the path of its motion. According to co-author Thomas Krichbaum at the Max Planck Institute for Radio Astronomy (MPIfR) in Bonn, seeing such features is hard to explain with the simplest models of outward-moving jets. Instead, they indicate something more complicated is going on, such as rotation or instabilities within the jet itself.

“This is like finding a very different shape by opening the smallest Matryoshka [Russian nesting] doll,” said lead author Jae-Young Kim, also of the MPIfR, in a press release.

Because data were taken over the course of several days, the team was also able to watch the region evolve over time. They noticed the strange features changed daily, further bolstering the idea of complexity within the jet. These speedy changes, according to the paper, could be due to shock waves or instabilities within the jet, especially if it is rotating. This isn’t the first time 3C 279 has shown such rapid changes. Like many actively feeding black holes, 3C 279 flickers and flares when astronomers look at it using radio, optical, X-ray, and even gamma-ray telescopes. Scientists believe these flickers occur when globs of material — such as gas, dust, and even stars — are devoured by the black hole. Before anything can fall in, however, the doomed material first forms a hot, swirling accretion disk. Most material in the accretion disk eventually ends up in the black hole. But some of it gets shot out into space as jets, often at blistering speeds. This complex interplay between the black hole gulping down material, its swirling accretion disk, and its explosive jets is still something of a mystery. But images like this and others from the EHT are now helping astronomers peer into a region previously invisible, watching events play out that could, until now, only be modeled on computers. “Last year, we could present the first image of the shadow of a black hole. Now we see unexpected changes in the shape of the jet in 3C 279. And we are not done yet,” said J. Anton Zensus, Chair of the EHT Collaboration Board and Director at the MPIfR. “We are working on the analysis of data from the center of our galaxy in Sgr A* [the Milky Way's supermassive black hole], and on other active galaxies such as Centaurus A, OJ 287, and NGC 1052.” “As we told last year,” he said, “this is just the beginning.”