Even Near Pulsars, Life May Find a Way 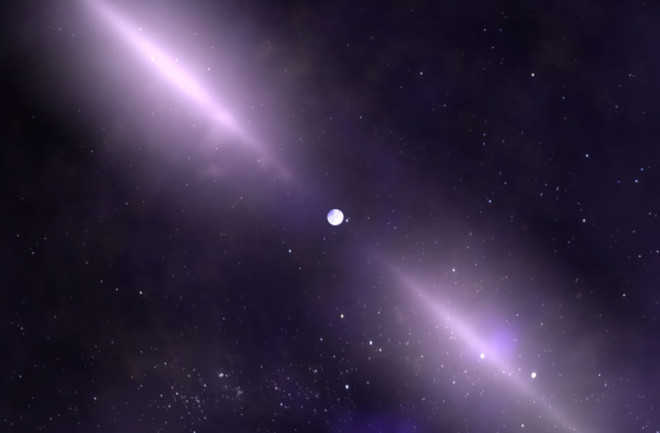 (Credit: NASA) Exoplanets have dominated astronomy news so much in recent years, some people are getting sick of them. It’s funny to think that their existence has only been confirmed for 25 years. Before astronomers announced in 1992 that pulsar B1257+12 had a couple of planets in tow, the idea of planets existing beyond our solar system was just that, an idea. It made sense, but no one had ever seen any. The not-so-secret motivation behind exoplanet research nowadays is the hope of one day finding an Earth twin, a world that could — or even does — support life. Pulsars are radiation-spewing monsters, so the first exoplanets couldn’t possibly support life, and they’ve gradually faded from the spotlight. But a new paper in Astronomy & Astrophysics suggests we shouldn’t have been so hasty. Pulsar Protection The most exciting exoplanet finds are those that orbit within their host star’s habitable zone, an area at just the right distance from the star to allow for liquid surface water and thus, potentially life. The paper’s authors, two astronomers at Leiden Observatory in the Netherlands, suggest that pulsars have their own habitable zones — surprising, given the harsh X-rays and other radiation that such stars emit. But, if a planet is big enough — some one to 10 times Earth’s mass — and it has an atmosphere at least 1 million times as thick as Earth’s, then it might just cut it as habitable even around a pulsar. The idea is that the enormous atmosphere would act as a shield for the planet’s surface, absorbing the deadly radiation while still allowing for enough heat to melt water. And a bigger world, preferably with a decent magnetic field, is necessary to hold on to that atmosphere over long enough time scales. So not only are pulsar planets in general potentially habitable — the OG pulsar planets specifically may be. The paper looked at B1257+12’s three planets, and found that all three could be in their star’s habitable zone, with the two bigger ones fully compatible with habitable conditions — as far as we know, of course. We don’t have enough data to tell for sure. Life Finds a Way This is cool not just for the historical curiosity involved (the very first exoplanets discovered might just be habitable!), but also for what it says about habitability in general. Even the universe’s death traps could be survivable! Life is a hardy thing on Earth, found even in the harshest environments — it doesn’t need much. If even pulsars can host habitable planets, it looks like the odds for life existing elsewhere in the cosmos just got that much better.