Even More on the Stimulus

I'm sorry, but I cannot seem to get this stimulus package off my mind. For my whole life I have watched the federal government bounce along with a few hundred billion dollars of non-military discretionary spending, give or take. Mostly take - this portion of the federal budget is the part most under pressure, year to year. Of course the largest portion of federal spending goes into servicing the national debt, and into Medicare and Social Security. But I digress. Now, under extreme economic duress brought about, ultimately, by the collapse of the housing market and with mortgage-backed securities added as an accelerant, the economy is in free fall. The government is seemingly on the verge of an absolutely massive, $900 billion spending spree, most of which is for the sorts of discretionary spending that would have taken years, or decades, to happen. If ever. It's among the most extraordinary things I think I have seen in my life. Many in Washington appear to be very, very, nervous about doing this, but just about all are convinced that the government needs to do something, whatever it can, to avert what would amount to a very long, deep economic depression. Opinions abound, and there is a lot of crazy stuff being said on both sides. A lot of it comes down to the old partisan bickering about how the Dems want to tax and spend, and all the Repubs want is to stop spending and cut taxes (though all they did when in power was cut taxes, for corporations and the already rich, and dramatically increase spending). There has been a lot of noise about this or that item in the various versions of the bill, with detractors invariably questioning its "stimulatory" value. (For example, check out what the GOP thinks is non-stimulatory here.) So what's the best thing for the government to spend money on? Where does one get the best bang for the buck? Lost in the main stream media discussions has been any mention of the velocity of money. If the government spends a dollar on something, how likely is it that it will be spent again, and again? How likely is it to generate revenue? Create jobs? Increase GDP? If money has velocity, then its mass must be its value. The product of the two is the momentum of the economy. And, as good physics students, we all know that to change momentum you need a force. That, I assume, would be prices: the less the price the more likely you are to spend it, increasing the velocity. But, then, the lower the price the more value the money has - here the analogy with Newtonian physics breaks down. It's non-linear. Over at MotherJones.com there is a very interesting, if short, article by James K. Galbraith. But even more interesting is the graph accompanying it: 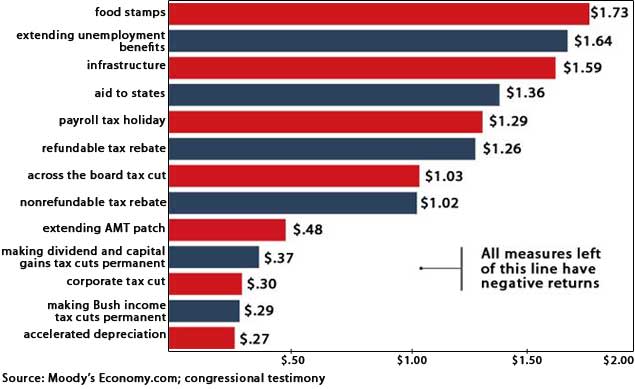 They say this comes from Moody's Economy.com, though I have not found it yet...I am not a subscriber. It purports to show the economic return enjoyed for each type of dollar spent, though I am not quite clear on just how economic return is defined. Anyway, taken at face value this graph would seem to squelch definitively the incessant chant for tax cuts, and give strong motivation for spending on infrastructure and the economic safety net. Come on, MSM, cover this story! Galbraith's main point is that the government ought to be taking a much longer view, and I think that at least part of the $900 billion stimulus does exactly that: the portion devoted to research and development can lead to the sorts of new technologies that will truly sustain the next economic expansion. I would love to see added to the graph above a bar corresponding to federal support for basic scientific R&D. Even if you just figure that if you give a professor money she spends it all on hiring a postdoc, how does that impact the economy? One of my main worries is that all the science money in the stimulus package will go to "one-shot" big-ticket items, when what we need is people, too. But that kind of money is not represented by a one-off stimulus, but a sustained year to year program of spending on science. What we need is a long-term increase in federal spending on science. A long term commitment, in other words, reflecting basic science policy. Indeed, also lost in the discussion has been this: just what the hell is the federal budget for 2010? Ordinarily, the administration's budget request would be rolled out the second week of February or so. Like, next Monday. Not to mention that there would usually be a State of the Union address; all we know for the past 10 days is that Obama will address Congress some time in mid-February. If I were him I would like to do it after passing the stimulus package... We do live in interesting times.