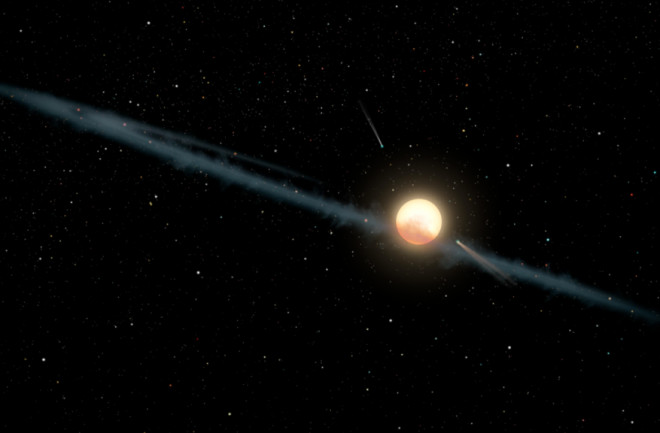 An artist’s concept of a ring of dust orbiting Tabby’s Star. (Credit: NASA/JPL-Caltech)

About four years ago, one star gained notoriety when some astronomers suggested its weird light pattern could be signs of artificial “alien megastructures” blocking the star’s light. Though scientists generally say that clouds of gas and dust are most likely the culprit, the source of that gas and dust remains a mystery.

One possibility is that the star, formally called KIC 8462852, kidnapped an icy “exomoon” from its parent planet within the system, researchers reported earlier this month in the journal Monthly Notices of the Royal Astronomical Society. Scientists called these hypothetical escaped moons “ploonets.” And if such a moon was brought close to the star, the world would evaporate, creating dust and debris that obscures the star.

If the researchers are right, this would be one of the earliest signs of an alien moon we’ve ever observed.

Researchers nicknamed the star Tabby’s Star and Boyajian’s Star after the astronomer Tabetha Boyajian and colleagues, who pointed out its quirks in late 2015. The star sometimes dimmed by less than one percent and sometimes by as much as 20 percent, and there didn’t seem to be any pattern.

Astronomers later found that the star’s overall brightness dimmed over time as well. That led researchers to suggest that the most likely explanation for the combined dipping and dimming was clouds of dust and gas obscuring the star.

Smaller particles in the system could block light temporarily and then dissipate into space as the force of starlight pushed them outward. This could account for the brief, irregular dips. Larger particles, however, may be hefty enough to settle into orbit rather than get pushed out by the star’s radiation. If more and more large particles accumulate, more of the star’s light would get blocked over time.

So clouds of gas and dust can explain both the dipping and dimming behavior. The question is: Where could this gas and dust come from?

A team of astronomers led by Brian Metzger at Columbia University proposed that the source could be an evaporating, icy moon whose planet collided with a star.

“I believe that this is the most promising one so far, but there are camps in many different fields here,” says Boyajian, now at Louisiana State University, who was not involved in the study. Others have proposed that groups of asteroids or interstellar gas and dust might be responsible.

Metzger’s team ran computer simulations of star-planet collision scenarios to see what might happen to the planet’s moon. As the planet and moon approached the star, the star’s pull on the moon overpowered the planet’s hold, kidnapping the moon into its own orbit while the planet plunged into the star. Most of the time, the moon would eventually be flung from the system or consumed by the star as well, they found. But about 10 percent of the time, the orphaned moon stayed in a stable orbit around the star.

If an icy moon came close to a star in this way, it would begin evaporating. Ice and other volatile materials would escape the moon as particles of various sizes, potentially accounting for both the short-term dipping and long-term dimming behavior observed in Tabby’s Star.

If confirmed, this weird star could be one of the earliest signs of an exomoon ever found.

“When we look at many, many stars very carefully, we notice the ones that are a little different,” says Metzger. “And we often learn more from those small differences than we learn from the many millions that are ordinary.”

Editor’s Note: An earlier version of this story misstated when the study was published. It was published September 5.