Evidence of plate tectonics is detected on Jupiter's moon. 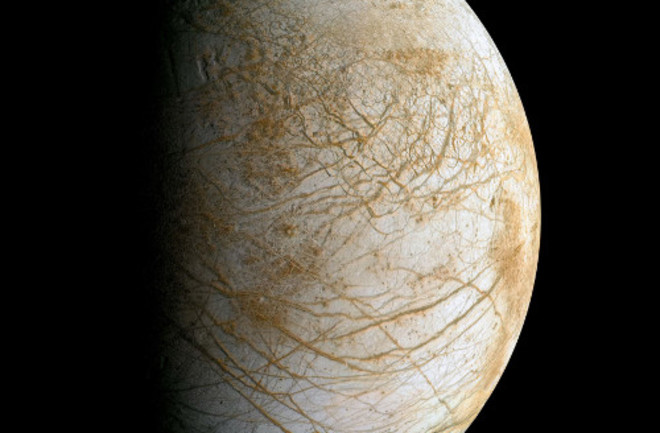 Ever since NASA’s two Voyager spacecraft snapped the first photos of icy cracks crisscrossing Jupiter’s moon Europa in 1979, astronomers have speculated that tectonic forces could be at work. But the first solid evidence didn’t arrive until September, when a team of planetary geologists announced it might have solved the mystery by treating the moon’s crust like a jigsaw puzzle.

Using data from the ’90s-era Galileo probe, the team — led by Simon Kattenhorn, a structural geologist and planetary scientist at the University of Idaho — digitally deconstructed one region of the moon’s surface into icy pieces, then tried to fit them back together.

Astronomers digitally deconstructed a region of Europa and reassembled the “puzzle pieces” of the icy surface by lining up the cracks. They theorized that a 7,700-square-mile missing piece was forced below the surface by subduction. (Credit: Simon Kattenhor and Louise Prockter/NASA/JPL-Caltech)

Researchers were surprised to find a 7,700-square-mile piece (about the size of Wales) missing, but they theorized that it had moved over warmer ice layers until it collided with another plate and was forced beneath the surface, out of view. (This process, called subduction, creates mountain ranges, volcanoes and trenches on Earth.)

NASA officials say it’s the first evidence that a body other than Earth has active plate tectonics.

The find isn’t just geologically interesting: The movement of material from the inhospitable surface down into the ocean could supply crucial chemical nutrients for possible living organisms in the global ocean far below.