Etna Has First Intense Eruption in Over a Year 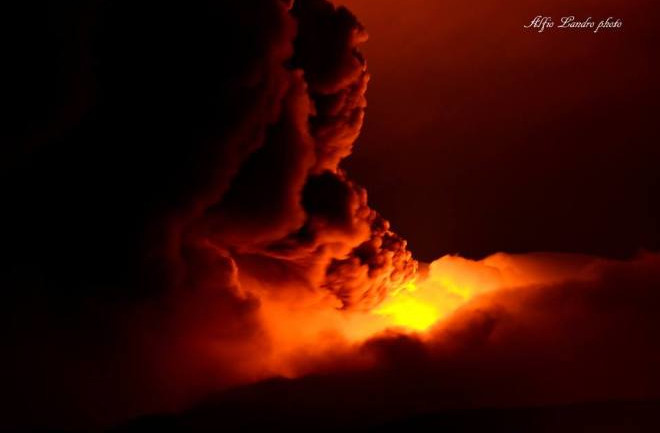 The glowing vent and ash cloud during the December 28, 2014 eruption of Etna. Photo by Alfio Landro, used by permission. It has been a quiet year for Italy's Etna, but as if to remind everyone that the volcano is almost always ready to erupt, Etna produced its most intense eruption ("paroxysm" in the lingo of the Osservatorio Etneo) since December 2013. This eruption from the New Southeast Crater had all the classic pieces of an Etna eruption - lava fountains, lava flows and ash fall that covered the region with dark grey volcanic debris. However, as intense as it was, it was also brief, ending within a few hours of starting and by this morning, Etna was merely steaming in the morning sun (see below). You can check out some video of the eruption taken last night by Alessandro Lo Piccolo, where the ash-and-steam column is clearly seen glowing red (see above, likely reflecting the light from the lava fountains and lava flows).

The steaming crater of Etna seen on the morning of December 29, 2014, following the previous night's paroxysm.

Dr. Boris Behncke, used by permission. Etna's eruption is a great reminder that you still have 2 days to vote for the 2014 Pliny for Volcanic Event of the Year. Cast your ballot by December 31 to be counted!