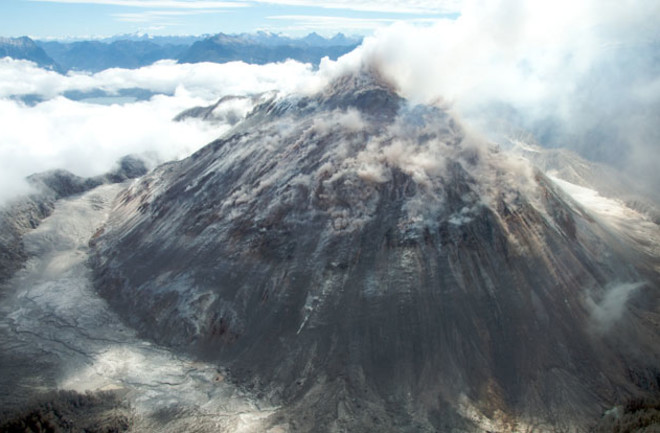 The steaming dome of rhyolite lava at Chaitén in Chile, seen on January 23, 2009. The eruption of Chaitén in May 2008 launched this blog. Image: Sam Beebe / Wikimedia Commons. First off, I wanted to apologize for the paucity of posts as of late. We're into the end of the semester and I have been buried in both preparing new lecture/labs for both of my classes and attempts to grade all said work. This has devoured the time I usually have to write posts. Combine that with the overall exhaustion from the semester, the continued work on my first Lassen manuscript, organization for my tenure dossier submission and preparation for this summer's research campaign (along with the rough winter here in Ohio), and it has been difficult to concentrate on writing posts that are up to snuff for the blog. Now, all of this shouldn't be an excuse for me to getting out even brief posts on some of the new activity out there, but since I started this blog 6 years ago (this week!), we've seen the rise of a number of other blogs that can constantly update us on every little burp from volcanoes around the globe -- something that was missing when I started Eruptions back in 2008. This is not to say that having a volcanologist discuss all this activity isn't vital, but it does mean that I'm no longer the only source of information. Twitter has also changed the way news is spread and when I don't have time to post, I end up tweeting that volcanic tidbit there instead of here on the blog. It is hard for me to believe that Eruptions started six years ago (the official anniversary is May 1) ... and I still love writing this blog. When I started this blog, I was a postdoctoral research at UC Davis trying to make a name for myself in the field. Now, six years later, I'm headed up for tenure this coming fall here at Denison and feel like I've done a good job establishing myself as a teacher, researcher and public outreach figure in volcanology. I can't complain about a lick of it -- but the workload adds up over the years. So, right now, the posts may be spread out a little more than they used to be, at least until the semester has settled down after mid-May. I'm also pressing to make sure the promised return of the past comments actually happens and the front-page links to past posts and link to the "Volcano Webcams of the World" (which I will update right after the semester) come back. I'm going to attempt to swing back to having some shorter posts about the volcanology of new eruptions along with the longer pieces on volcanic research and my battle against poor science journalism and pseudoscience. Stay tuned because Eruptions will be back in full force -- it has been a great ride so far.