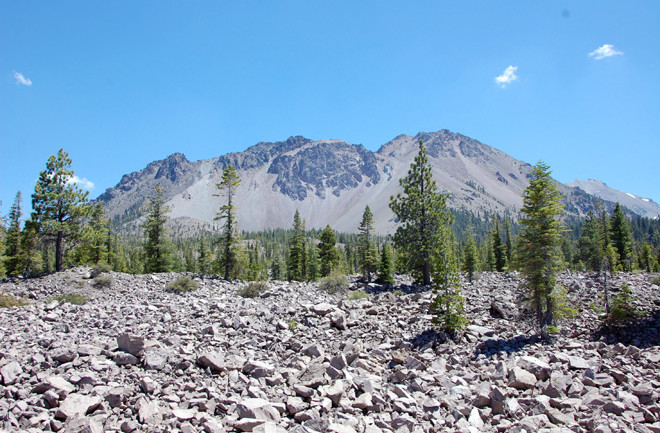 My view of Chaos Crags from Chaos Jumbles in Lassen Volcanic National Park, California. Image: July 2013 by Erik Klemetti. This summer has been crazy. I mean, off the boards, crazy. In fact, this summer was (is?) the busiest summer I've ever had as an academic. Part of this is because I had two great students working with me this summer on two separate projects -- the Mineral King and Lassen Volcanic Center projects. They got a ridiculous amount accomplished and really got my lab humming here at Denison. I've traveled to California twice, once for the Council on Undergraduate Research Meeting and once for field and labwork across northern California. I've also been working on not one, not two, but three manuscripts. One (Mineral King) is in the last throes of revisions after reviewers. Another (Lassen) is getting another revision after discussion with co-authors. The third (New Zealand) is getting rebuilt for submission later this fall. Throw in two abstracts, one for the Geological Society of America meeting in Denver this October and the other for the American Geophysical Union meeting in San Francisco in December, and you've got quite the summer (even if you assume that I only exist in my office). This is really crunch time for me because a year from now, I'll be putting together my dossier for tenure. So research this summer was intense, to say the least. But wait, there's more! Classes start here for the fall on August 29 and I'll be teaching the largest section of my Rocks & Minerals class (the first required class in the major) I've ever had. Why am I saying all this? Mostly to apologize for the scant posting this summer (at least for Eruptions standards). Now that my two students are done for the summer, I'll be headed to Massachusetts for some R&R, so posts will come if my brain allows me to think. Otherwise, look for a return to the regularly scheduled postings after August 21. Science doesn't sleep, and neither do the scientists who do it, apparently.