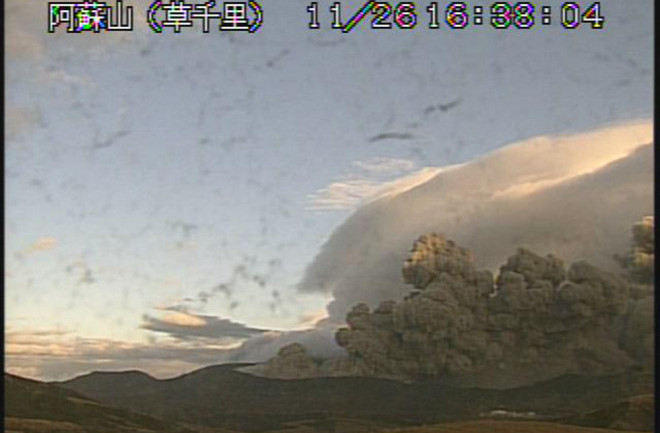 The plume from Aso in Japan, seen on November 26, 2014. Photo by JMA webcam capture from James Reynolds / Twitter. New eruptions at Japan's Aso have become intense enough to cause some flight cancellations in and out of Kumamoto. The Asosan caldera is one of the Japan's more active volcanic cluster and since 2003, the Nakadake crater in Aso have been producing small explosive eruptions. However, the tenor of the activity has increased since the end of August. The currently activity has been producing a steady plume that reaches 1-2 km (3,200-6,400 feet) - check out video of the intense explosive activity from today, including an overflight of the volcano. Ash from the current eruptions have fallen on cities as far away as 40 kilometers. Currently, the Japanese Meteorological Agency has Aso on a level 2 (of 5) alert, the same level since deformation was noticed in early August. Today's Terra overpass also caught Aso in action, with a brown-grey plume drifting to the southwest (see below).

The plume from Aso, drifting to the southwest, seen on Terra's MODIS imager. Unzen is also shown to the west of Aso. Image by NASA. Unlike what the AFP article about the eruption implies, this is not the first eruption of Aso in almost two decades. From 1989-1994, Aso did produce a number of VEI 2 explosive eruptions from the Nakadake cone. The last known VEI 3 or greater eruption from Aso was in 1906, again from Nakadake. However, the Aso caldera has produced some giant eruptions, the most recent being the ~600 cubic kilometer Aso-4 event that occurred ~90,000 years ago. When conditions are right, there are quite a few webcams pointed at Aso, including one located within the main crater (see below). Currently, the JMA webcam pointed at Aso is showing not much of a plume but a strong glow from the Nakadake crater (note: the JMA webcam is the 13th from the bottom of the list on the right hand side.)