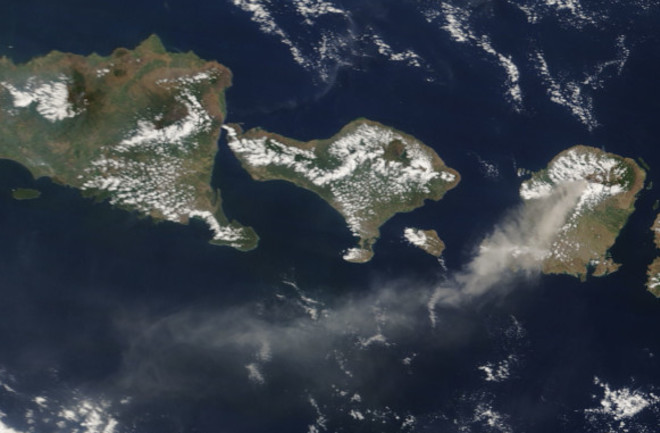 The ash plume from Indonesia's Rinjani on November 5, 2015. Taken by Terra's MODIS imager.

Two eruptions are catching my attention---one big and one little. In Indonesia, Rinjani (see above) has been producing enough ash to cancel flights across the eastern part of the country, including Bali. The Barujari vent inside the larger Rinjani caldera is the culprit for this new eruption. Barujari is a small cinder cone that erupts frequently and is likely the only source of eruptions at Rinjani since the VEI 7 Samalas eruption around 1257 A.D. Barujari last erupted from 2009-2010 and typically produces small explosive eruptions that can blanket the surrounding landscape with grey ash. The current eruption follows that pattern, with explosions carrying ash as high as 4 kilometers (~14,000 feet) as it drifts west from Barujari. The ash has caused flight delays or closures at airports over 200 kilometers from the volcano. In some of the closest airports, aircraft engines have been wrapped in plastic while on the tarmac to prevent it from getting into the engines---remember, jet engines and ash don't play well together. Over 6,000 passengers have been stranded so far during the now three days of flight disruption caused by Barujari, although today Indonesia officials have said their airspace is safe again (which hasn't stopped some airlines from continuing to cancel flights) and the airport at Bali has reopened. More importantly than the inconvenience of travelers, the ash is a health hazard to local citizenry. Dust masks have been distributed to 5,000 people living near Barujari to help mitigate against breathing in the volcanic ash (which is really tiny shards of volcanic glass).

A small explosion at the Voragine crater on Etna on November 5, 2015.

Meanwhile in Italy, Etna is rumbling on a much smaller scale. The Voragine crater has been producing small Strombolian explosions (see above) that produced some ash and volcanic debris that hasn't made it far from the crater. This is some of the only eruptive activity that Etna has experienced this year. The

New South East Crater erupted in May and the Buoco Nuevo has some small explosions in April but this is the first activity noticed at Voragine since January. The New South East Crater has been degassing strongly over the past month, so magma clearly lurks not far below the surface at Etna, but unlike some recent years, 2015 has been very quiet for the Italian giant.