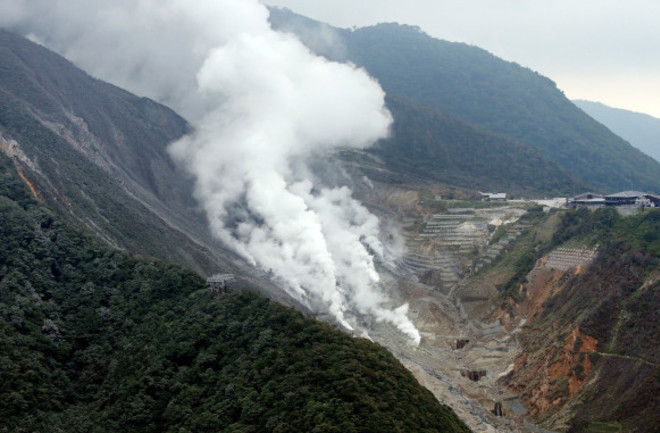 Steam rises from a slope near the hot springs resort of Hakone, Kanagawa prefecture on June 30, 2015. Japan's meteorological agency on June 30 raised a volcanic warning for the popular hot springs resort of Hakone by one notch. JIJI PRESS/AFP/Getty ImagesJapan Earlier this spring, the area around Hakone has deemed too dangerous for the tourists who usually frequent the area due to increased seismicity and deformation of the volcano near Tokyo. Yesterday, Hakone experienced a small explosion that could be a precursor of more eruptive activity or merely heating up of hydrothermal system. This explosion was likely a steam-driven (phreatic) explosion caused by water heating up to the point of boiling in the upper parts of Hakone's hydrothermal system. A landslide accompanied the explosion, although it is unclear whether it preceded or followed the event. You can check out some video of the vent that had the explosion, along with some of the debris that it produced. It looks to be still vigorously emitting volcanic gas and steam. The Japanese Meteorological Agency raised the alert status at Hakone to Level 3 after yesterday's explosion and the evacuation radius was increased to a kilometer from the central area of Hakone. Explosions like these are common at the volcano and other volcanoes like Hakone. Sometimes they are signs of impending magmatic eruptions but sometimes they are merely one-off events like the explosions at Mayon and Ontake---both of which took people's lives. This is why the no-access zones at Hakone are so important even when the future activity is unclear because most of these steam-driven explosions are very difficult to predict and can happen with almost no warning. This unrest has also prompted Japanese officials to tell hikers on Fuji to wear helmets (although no signs have been evident for new activity at Fuji). The Diet also passed a measure requiring all towns and municipalities near volcanoes to develop evacuation plans. GuatemalaEruptions at Fuego in Guatemala have become more intense and are now producing pyroclastic flows. Video taken today shows pyroclastic flows moving down the slopes of Fuego, while a time-lapse from last night captured the lava erupting from the summit vent. This means the pyroclastic flows are likely being generated by the collapse of the growing dome. Observers on the ground estimate the plume from Fuego's current activity might be as tall as 5 kilometers (~16,000 feet). Taken in total, it likely means Fuego has entered a new, more active phase of eruption.

Iceland Meanwhile, after a few months of volcanic quiet in the island nation, a new earthquake swarm

has started off Iceland's southwestern coast. This activity is centered around Eldey

, and the Icelandic Meteorological Agency

has raised the alert status to yellow

. Since June 30, the area, 30 kilometers off the end of the Reykjanes Peninsula, has experienced hundreds of earthquakes

, some as large as M4-5. Most likely a new eruption would be submarine, but there is always the chance that it could continue to produce a new Surtsey-like eruption

and most of the time, they don't lead to a new eruption.