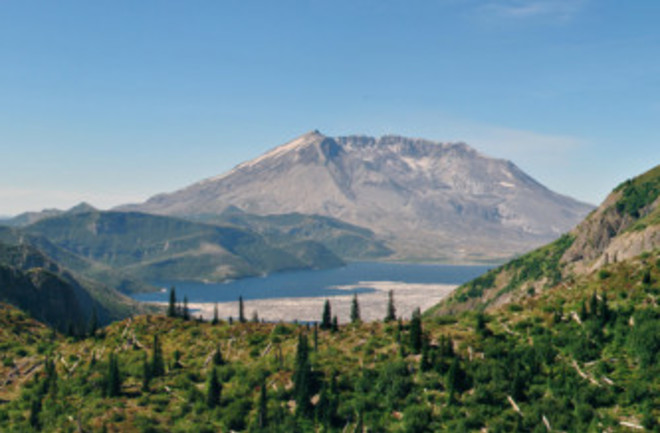 A view of Mount St. Helens, showing the crater carved by the 1980 eruption. September marked the 10th anniversary of the start of the most recent bout of eruptions at the Washington volcano. Photo by

Josh Sherrill / Flickr Some news from the volcano world: Japan The death toll from this weekend's eruption from Ontake has now reached 47 and the search for more victims continues. Most of the deaths appear to be due to head trauma from the rocks ejected during the explosion itself. The JMA released more information regarding the potential signs of an eruption and really, there were no signs that would suggest an event like this would happen. There was a small swarm of earthquakes a few weeks before the eruption, but swarms like that are common at many volcanoes and could be interpreted to mean any number of events (magma movement, fluid movement, gas movement). These signals are by no means clear indicators of eruption -- if you read any daily or weekly volcano monitoring status updates from around the world, you'd see that dozens of volcanoes show these symptoms without producing any eruption. In all, this seems like a tragic accident caused by a steam-driven (phreatic) explosion that no one could have predicted. Of course, leave it to the tabloid media to start jumping on this eruption to say that Fuji might be the next to blow. Iceland Not to be forgotten, the Holuhraun eruption in Iceland continues to roll on unabated. The lava fountains and flows have still be releasing copious sulfur dioxide and the Barðarbunga caldera itself continues to subside. So far, none of this have meant much of a change in the character of the eruption. The lava flow field now covers 44 square kilometers of the region north of the Vatnajökull icecap. Earthquakes are continuing as well, suggesting that magma is continuously being supplied to the fissure and dike area under Barðarbunga and Holuhraun. The lava flows have been especially impressive from space, where the infrared imager on EO-1 captured one of the largest lava flows of the field. Indonesia Activity at Sinabung has been on the upswing for the past few days, with a number of dramatic pyroclastic flows due to the collapse of the crater lava dome. This continues what has now been a year of unrest at the Indonesian volcano. Some evacuees have returned to their homes in the last few weeks, but the Wall Street Journal had an interesting post looking at the numbers of this extended volcanic crisis. In total, over 10,000 people are still living either in shelters or on new land that the government has set aside for people whose homes were too close to Sinabung. California There was some rumblings about an earthquake swarm near Mammoth Mountain on the edges of the Long Valley caldera in California. Swarms like this are not uncommon at Mammoth and this one seems to be tied to water (hydrothermal) and tectonic stresses rather than anything magmatic or volcanic. If you enjoy reading inane coverage of such events, MTV News may have set a new standard for vapid coverage of something like this Long Valley swarm (Kurt Loder sheds a tear somewhere). Washington Meanwhile, to the north, media outlets were having fun trying to drum up anxiety at Mount St. Helens. Several news sources took USGS seismologist Seth Moran's words a little too literally when he said St. Helens is "

getting ready to erupt again". Pretty much every active volcano is doing this between eruptions and Moran's words were meant to mean that deep beneath the volcano, the processes that lead to the next eruption have started but that eruption might not happen for years to decades. This is why volcanologists and seismologists working on volcanoes need to be very careful with their word choice when talking to the media -- you never know what snippet they might misrepresent or misunderstand. If you want to know the status of all the Cascade volcanoes, be sure to always check the USGS Volcano Alert Status page.