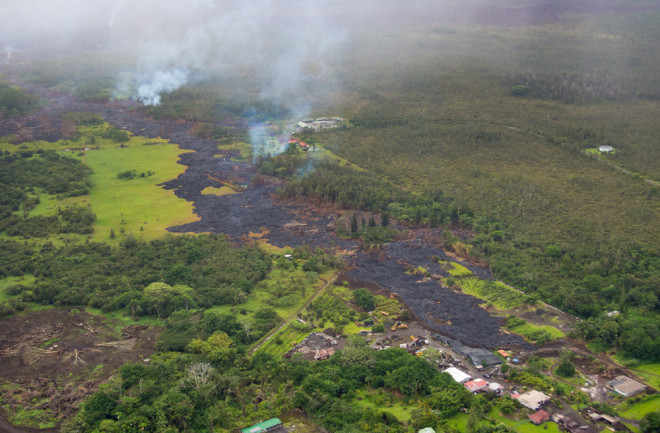 Aerial view of the lava flow near Pahoa on the east rift of Kilauea. Image taken November 5, 2014.

I'm in Vermont to give a talk at Bennington College, one of two talks I'm giving in the next week. The other one is a virtual talk for Central Arkansas - and you can drop in and watch it on Tuesday at 5 pm eastern. Before all that, time for some volcano news: Hawaii The lava flow continues to stagnate on the outskirts of Pahoa leaving people watching and waiting. However, if and when the lava flow continues to move, there will be issues with access to the town if the lava flow crosses the road. President Obama also declared the area a disaster, allowing for federal help in recovering from the lava flow - but likely this won't include diverting the lava flow if it continues it forward progress. OregonForbes has an interesting piece about the importance of the Newberry Volcano Enhanced Geothermal Project. In a future that will likely see our sources of power change dramatically, the exploiting the geothermal resources at a volcano like Newberry might becoming increasing vital. (And no, the exploration isn't going to cause the volcano to erupt). In another piece of geoengineering, the Guardian has an article about the potential to counteract the effects of a massive explosive eruption (think Tambora 1815) by pumping greenhouse gases into the atmosphere -- a dicey proposition on a lot of levels. MexicoPopocatépetl has been rumbling for a few years now and over the past few days, it entered a heightening period of explosions. The volcano had almost 200 small explosions on November 5 alone and incandescent debris (volcanic bombs) was thrown almost a kilometer from the vent. Remember, you can watch the activity at Popocatépetl on the CENAPRED webcam pointed at the volcano. Costa Rica The activity at Turrialba has subsided significantly since this past weekend's explosions. Luckily, many of the crops planted around the volcano (mainly within 6 km) survived the elevated activity. Be sure to check out the OVSICORI video that gets up close and personal with the active crater at Turrialba.