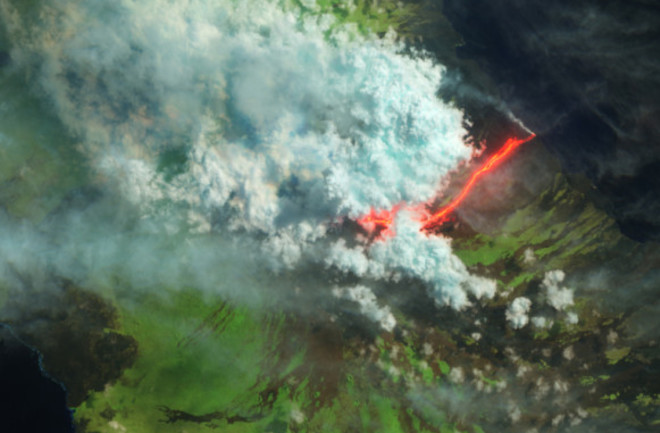 ALI image taken by EO-1 of lava flows and accompanying plume from Wolf in the Galapagos, seen on May 28, 2015. NASA Earth Observatory Some updates from the world of volcanoes after my mini-vacation to Chicago.

Last week saw an impressive, albeit short, burst from Shindake on Kuchinoerabujima in the islands south of Kyushu. The explosion itself was captured on video from webcams and people near the island. Some of these video captured pyroclastic flows that were generated as the explosive column collapsed. Hundreds of residents had to be evacuated from

Kuchinoerabujima and recently were able to return briefly to check on their homes and livestock. As much as 20% of the island was covered in ash from the pyroclastic flows and fallout from the eruption. The volcano is still on high alert so the evacuation order remains in place. This was the first large explosion on Kuchinoerabujima since 1980, although a very small explosion was noticed in August 2013, possibly a precursor to this event. (And although it might be easy to think, there is no direct connection between the eruption and the M8.1 earthquake in the Izu-Bonin arc south of Japan)

Piton de la Fournaise has been producing a steady flow of lava since May 17 ended over the weekend. The eruption had been generating a small spatter cone to go with lava flows. You can check out video of the eruption (that has become a big tourist destination on the small island) along with drone footage of the crater and flows.

New unrest was noticed at Guallatiri in northern Chile after two small earthquake swarms was detected along with some minor deformation of the volcano. The SERNAGEOMIN raised the alert status at the volcano to yellow due to this unrest, but the volcano itself is in a fairly desolate area along the Chile-Bolivia border. The last confirmed eruption from Guallatiri was in 1960, although a persistent plume from fumaroles near the summit persist.

Not a lot of news coming out from the eruption of Wolf on Isabela in the Galapagos, but a recent photo shows that the lava flows are continuing. Over the weekend, some of the flows made it to the ocean as well. The NASA Earth Observatory captured a nice shot of the long, narrow lava flow from Wolf on May 28 and the latest Global Volcanism Program update says that the plume from Wolf was especially sulfur-rich, released over 100 kilotons of sulfur in the first 13 hours of the eruption.