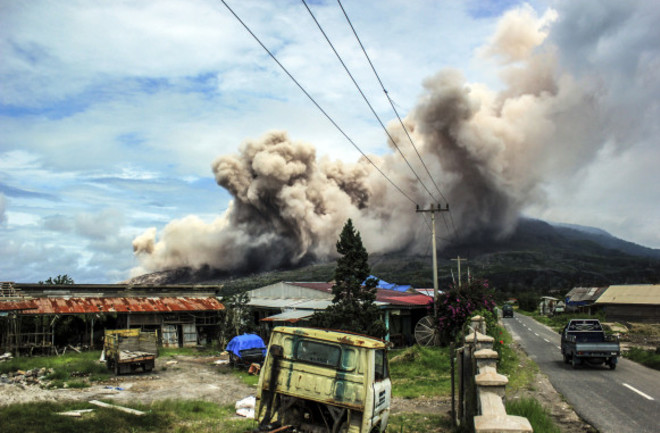 Mount Sinabung spews volcanic materials from its crater in Tanah Karo, North Sumatra, Indonesia, June 12, 2015 Gatha Ginting/Anadolu Agency/Getty Images Some of the volcano news from the past few days: JapanAsama, one of the volcanoes located near Tokyo, erupted on Tuesday. The weather conditions haven't permitted much of a view of the eruption, but it appears to have been a small explosion that spread ash only on the area near Asama. However, officials from the Japan Meteorological Agency (JMA) have warned that these explosions could be precursors may continue. This was the first eruption at Asama since 2009. A 2-kilometer exclusion zone has been set around the volcano as a precaution for tourists who visit the area. PhilippinesBulusan had a small phreatic (steam-driven) explosion on Monday, it's first activity since similar small explosions in 2011. The eruption itself only lasted 10 minutes and produced a 1-kilometer ash plume that dusted ash on nearby villages. PHIVOLCS does not think this eruption is likely going to lead to anything larger, although they are still assessing the situation. These sorts of explosions are relatively common at Bulusan and other volcanoes in the Philippines. They are generated by water seeping down into the hot rocks at the summit of the volcano. As heat from below continues to warm the water-saturated rocks, that water can flash to steam, prompting at explosion that has no new magma in it.

Mayon, another restless Philippine volcano, continues to feel earthquakes with no explosions.

Indonesia The increasingly growing dome on Sinabung continues to periodically collapse, forming dangerous pyroclastic flows that have swept down the slopes of the volcano. This activity has prompted more evacuations of the remaining people living near Sinabung. However, due to the long-term nature of this eruptions at Sinabung, people are not leaving when asked by the government. Some estimates by local officials have only about 1/3 of the local population have voluntarily left for temporary shelters further from the volcano. These types of volcanic crises are one of the largest issues facing Indonesia, with tens of thousands of its citizens in evacuation centers over the last few years.