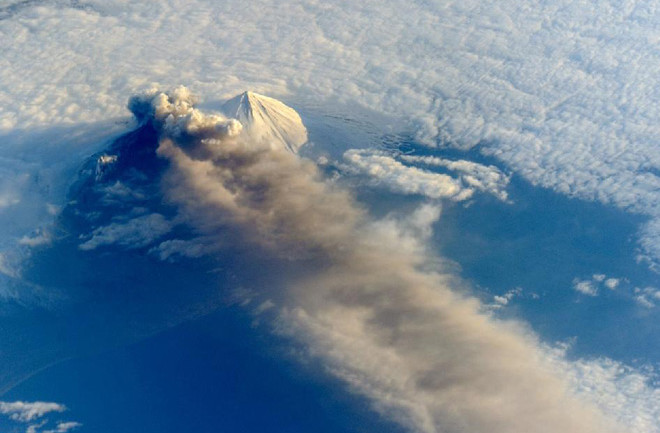 The eruption of Pavlof in Alaska as seen from the International Space Station on May 18, 2013. Image: NASA. Lots of volcano news over the past few days, not to mention the earthquakes that got our attention. The two most of these earthquakes were especially interesting to me. The Okhotsk Sea earthquake in Russia that was not only large (~Mw 8.3) but also incredibly deep (~600 km). This was likely caused by a deep fracture in the slab of Pacific Ocean sliding under Eurasia that forms the Kamchatkan volcanic arc -- and the depth meant it was felt as far away (if you believe reports) as Moscow and Kobe, Japan. The second earthquake of note was the ~Mw 5.7 that occurred on the southern shores of Lake Almanor in California. This one was shallow and strong enough to be felt by friends of mine in Davis ... and is also a stone's throw (well, 50 km throw) away from the Lassen Volcanic Center. Onto the volcanoes! [N.B., I had a much more detailed post written today, but Wordpress decided to eat it ... and I don't have time to recreate the whole thing. So, sorry about the spartan text.] Turrialba, Costa RicaTurrialba in Costa Rica has a phreatic explosion on May 21. The video makes it look impressive, but it was actually just another on a long string of explosions since 2011 that betray the heat in the upper parts of the magmatic system. However, no juvenile material was found in the ash, so OVSICORI doesn't think this event is leading to anything larger. Copahue, Chile The alert status at Copahue was raised to Orange by the SERNAGEOMIN after the style and intensity of earthquakes at the restless Chilean changed over the last week. More earthquakes associated with magma moving were noted at the volcano while both land-based webcams and satellite imagery spotted ash plumes generated by small explosions. You can see the small steam-and-ash plumes from the crater in these images. Interestingly, the ONEMI (civil defence) in Chile has kept the civil alert status at Yellow for Copahue -- I wonder if the mismatched alert systems can be confusing for Chileans? Pavlof, Alaska Activity at Pavlof has subsided over the past few days. Cloudy conditions make observing the eruption area difficult, but seismic data and occasional views from pilots suggest only small explosions and a mainly white plume. This doesn't mean the eruption is ending, but right now, it is much less vigorous than it was earlier this week. Be sure to check out these images of the Pavlof eruption taken May 18 from the International Space Stations (check out the great oblique view above). Also, be sure to read Alex Witze's article on the continued effect of the budget crunch on the Alaska Volcano Observatory. Iceland Jut as the United States is seeing less support for their volcano monitoring network, Iceland is improving theirs to add more real-time data collection of the multitude of volcanoes on the island nation.