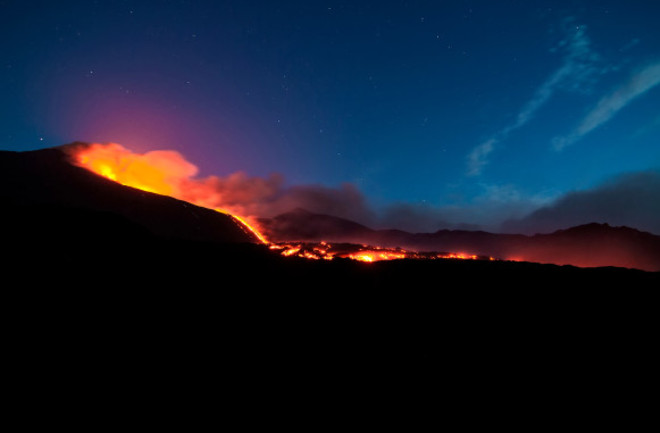 A stream of molten lava flows from Mount Etna on May 16, 2015 in Sicily, Italy. Marco Restivo/Barcroft Media /Landov Some updates from eruptions around the world over the past week: Italy After a few months of relative quiet for Sicily's Etna, the New Southeast Crater roared back to life (see above) late last week with Strombolian explosions and an impressive new lava flow. As usual, the eruption at Etna was extremely photogenic without much threat to life and property as the explosions and flows continued until late on May 16. Reunion Island For the second time this year, Piton de la Fournaise on Reunion Island erupted, sending lava flows down its slopes. This new eruption is very similar to those from February 2015 and the sequence of eruptions appear to be following the pattern of the 6-month-long 1998 events. You can read about much of the current eruption on Claude Grampey's blog or check out the Piton de la Fournaise webcams. Japan A few weeks ago, I wrote about the heightened alert at Japan's Hakone. Now there are reports that the ground beneath the hydrothermal area on Hakone has risen 12 cm (4.7 inches) in the last month. Combined with the earthquakes, the signs increasing point towards magma rising in the system. The volcano remains on Alert Level 1 as local officials are preparing for a long-term disruption of the popular tourist destination. Nicaragua and Guatemala The Central American nation's most active volcano, Telica, produced an explosive eruption that blanketed the region around the volcano with ash. The large, dark ash plume was captured up close by hikers on the volcano (probably a little closer than anyone needs to be to an explosion like that). People living near Telica has begun to show some ill effects due to the increased ash in the air. Concepción also had explosions according to reports from INETER. Fuego in Guatemala appears to be headed into a more active period as well, according to Guatemalan officials. Washington Today also marks the 35th anniversary of the 1980 eruption of Mount St. Helens (making it a busy week for Cascade anniversaries). You can check out people's memories of this historic eruption -- along with a compilation of remembrances that I featured during the 30th anniversary. There was also a cool article in the Seattle Times about the economic benefits derived from the sands (ash) of the cataclysm eruption. At the same time, concerns are growing about a tunnel constructed to help drain Spirit Lake after the 1980 eruption.