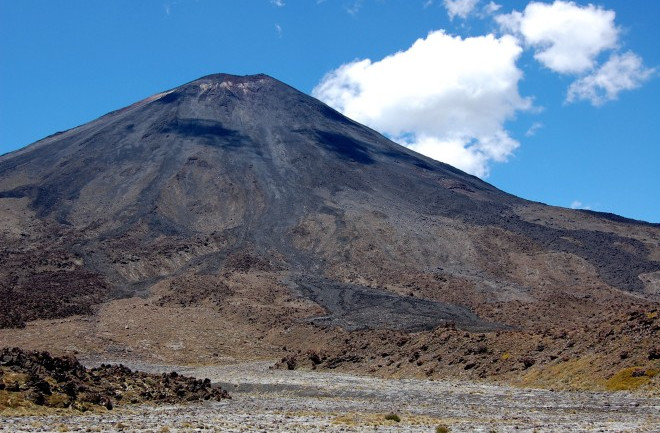 Ngauruhoe in New Zealand, seen in January 2009. Note the lava flows on its flanks from recent eruptions.

Erik Klemetti Some quick volcano updates: New Zealand Since the eruption of Tongariro and White Island in 2012-13, things have been quiet at New Zealand's volcanoes. Only three volcanoes have been on Level 1/Green alert status (some restlessness, but no eruption imminent): Ruapehu, White Island and Tongariro. However, Ngauruhoe* has joined this list after an increase in earthquakes under the volcano over the past few weeks. This isn't the first earthquake swarm under Ngauruhoe since its last eruption in 1975-77 that produced copious ash and lava flows. There have been 5 different periods of unrest, including a 4 year period between 2006-2010, none of which lead to an eruption. However, Ngauruhoe's busy volcanic history means that any seismic unrest needs to be closely watched. Between 1950-1977, the volcano produced 15 different eruptions between VEI 1-3 (small to moderate). The current prognosis from GNS Science volcanologists is that this swarm will not likely lead to an eruption, but if the seismicity becomes more intense, that assessment might change. If Ngauruhoe were go start erupting, you can catch the action on the GeoNet webcam. *Note: GNS Science separates Ngauruhoe and Tongariro for monitoring purposes, but the Global Volcanism Program lists their activity together because it is though that the two edifices are really vents of the same magmatic system. Chile

Volcanic hazard map for the current activity at Chile's Villarrica. Areas marked in red are the highest hazard areas.

SERNAGEOMIN The eruption at Chile's Villarrica continues. The volcano has been producing intermittent ashy, explosive eruptions since early March and so far, there is no end seen. Over the last week, most of the activity is as waves of explosions related to the strombolian eruptions in the main vent of Villarrica, producing ash that is mostly spreading to the east. The latest update from the SERNAGEOMIN suggests that this slowly increasing activity seen through the nearly constant ash emissions means that new magma has ready access to the surface, so a recurrence of the impressive March 3 eruption could occur. This video taken from a SERNAGEOMIN flight on March 18 around the volcano really show the ash-rich emissions and the thick layer of volcanic debris on its slopes. The biggest threat from another event like that would be lahars in the channels that lead away from the volcano (see below in red), but lava flows and bombs are possible, leading to the 5-kilometer exclusion zone around the volcano. The alert level for the volcano set by the SERNAGEOMIN currently sits at Orange due to the continued heightened activity while ONEMI (Emergency Management) has the communities surrounding the volcano on Yellow alert status. However, life is beginning to return to normal around the restless volcano as schools in Pucón and Villarrica have reopened today. As of this morning, the activity looks pretty quiet on the webcams pointed at Villarrica.