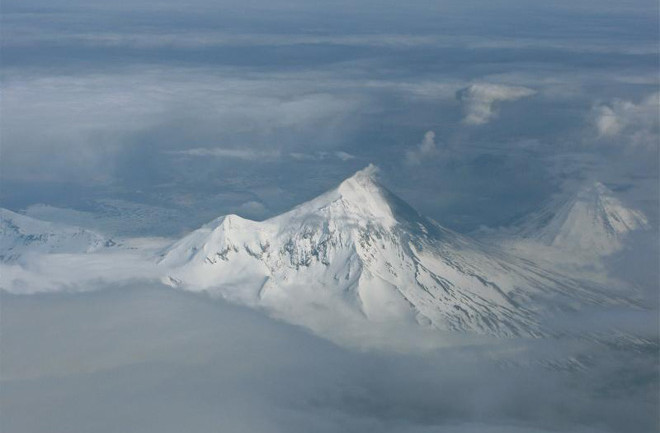 A very small plume seen coming from Alaska's Pavlof on May 22, 2013. The dark area on the slopes is ash and volcanic debris from the May 2013 eruptive activity. Image: Ryan Hazen and Brandon Wilson / AVO-USGS. June is here already, can you believe it? Yes, me neither. Onto some volcano news! Guatemala Last week, we saw that activity at Pacaya in Guatemala picked up. So far, the eruptions are fairly small, with volcanic material being thrown hundreds of meters from the crater -- likely this will only affect people living near or on the slopes of the volcano. As of today, the explosions have died down according to the latest report from INSIVEMEH, the volcano monitoring agency in Guatemala, and only a white plume is seen being emitted from the main crater. Meanwhile, a lahar was produced at Santiaguito in the Rio Niva drainage yesterday -- a common occurrence in locales like Santiaguito where there is abundant rain and ash on the ground. Alaska During the middle of last week, AVO lowered the aviation alert level at Pavlof to Yellow from Orange after signs that the current eruption was mostly over. Little to no ash emissions have been detected from the volcano (although clouds have obscured the view for a few days) and seismic activity has reduced significantly. Cleveland remains at Orange alert status as the dome growth at the summit could produce explosive eruptions without notice if the dome collapses. LiveScience has a nice piece on some new volcanic cones that have been discovered in southeastern Alaska, with at least 12 identified cones in the region. Compositionally, they seen to be related to the Northern Cordilleran Volcanic Province. Philippines Another volcano that began to show signs of unrest was Mayon, a volcano that recently took the lives of 5 climbers during a phreatic explosion. A small white plume has been seen coming from the volcano, some crater glow was noticed and slight inflation is continuing to be detected. However, there is enough restlessness at Mayon for PHIVOLCS to raise the alert status to Level 1 and continue to recommend a 6-km exclusion zone around the volcano. ChileCopahue, on the Chilean/Argentine frontier, is still on Red Alert. The seismicity at the volcano has come down some since the start of the current volcanic crisis, but ~52 earthquakes per hour are being recorded at Copahue. However, the style of the earthquakes still suggest a body of magma is rising under Copahue, meaning the threat of an eruption in days to months is still present. The current evacuation orders for are still in place for people living near the volcano. Looks like the SERNAGEOMIN webcam for Copahue is back up and running again as well, so you can watch for any new activity. And if you're looking for summer reading material, Andean Geology, an open access journal, as recently published a volume observing the 5th anniversary of the Chaiten eruption -- looks like lots of interesting science in that volume.