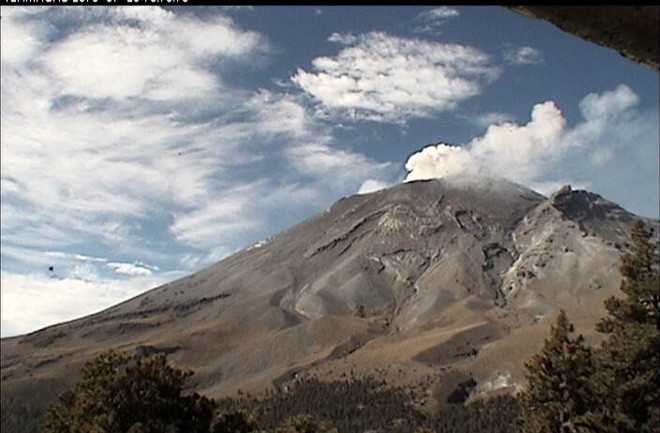 A webcam capture showing a small steam-and-ash plume from Popocatepetl on July 23, 2013. Image: CENAPRED. So, in the breach I go again. Starting tomorrow until the middle of next week, I'll be off at Lassen Volcanic National Park with my student and a colleague. We'll be sampling a variety of lavas and tephras erupted from the Lassen Volcanic Center that date back as far as ~600,000 years. This means no new posts until the middle of next week -- likely a recap of the field work with a lot of pictures from Lassen. Hopefully I can also try to explain some of the work we're doing at Lassen, examining the history of the magmatic system through zircon ages and compositions. Some news from volcanoes around the world: New Zealand After increased volcanic tremor was noted, the alert status at White Island was raised to Yellow today. Check out the GeoNet webicorders to see the very busy seismic signal coming from White Island currently. There has been some impressive activity from the crater lake at White Island according to Brad Scott of GNS Science, including "audible jets of gas" and "broader expanding bubbles of dark lake sediments and debris" throwing material 20-30 meters into the air. Be sure to keep an eye on the White Island webcams to see if you can catch some of this action. Indonesia Early this week, Merapi produced a small ash plume that topped out at ~1,000 meters (~3,280 feet). Sounds like this eruption was likely a phreatic explosion, but ash was dusted in areas surrounding the volcano. Surono, from the PVMBG, did not think behavior was out of the norm for Merapi but they would look to see if any further activity might suggest a new period of eruptions, the first since the dramatic events of 2010. (Of course, take this as you will, but July 21, the day before this small explosion, apparently marked the 1,000 day since the death of Maridjan, the spiritual guardian of Mount Merapi.) Hawaii If you enjoy people being stupid, a local photographer caught some images of tourists venturing to places you should never visit in Hawaii -- that is, lava benches above ocean entry of lava flows. These benches are highly unstable and prone to collapse -- and when they do, you fall into steaming hot water and lava! The gases coming off the lava flow when it enters the water are highly acidic as well, so breathing them can cause significant lung damage. It is best to admire these features from afar and not get tempted to become another victim of the ocean entries. Mexico Recently, Mexican officials downgraded the alert status at Popocatépetl to Yellow-Phase II (from Phase III) after the explosions at the restless volcano waned. This doesn't mean that larger explosions like we saw earlier this month might not happen again, but the risk is lower now. I did run across an amusing article about a journalist who wanted to right a DOOOOM article about Popocatépetl but when confronted by the science of volcanic hazards, came to realize that it isn't that easy to say volcano+large city = disaster. See you next week!