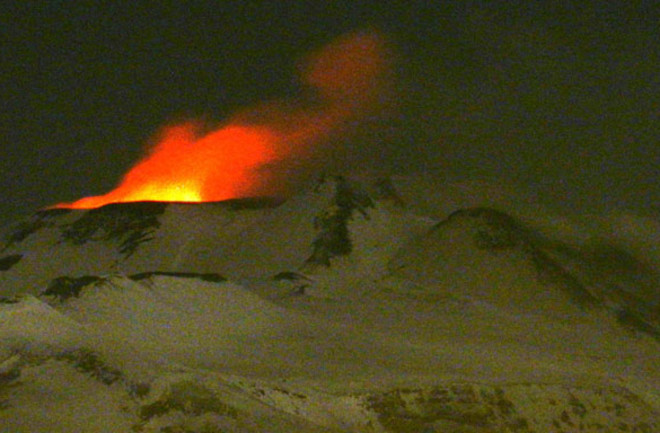 Strombolian activity in the Bocca Nuova crater at Etna on January 28, 2013. Image: Dr. Boris Behncke / Flickr. Some news from the world of volcanoes from this week: Italy Things are definitely heating up at Etna (no pun intended ... ok, maybe a little pun). The Osservatorio Etneo reports that Bocca Nuova had its fifth Strombolian event (sounds tasty) of the new year -- combine that with the two from the Southeast Crater -- and that's already 7 eruptions in 2013. In the days leading up to these new activity at the Bucca Nuova crater, there was intense degassing with fine ash that lead to the eventual Strombolian explosions that lit up the night sky over Etna. What makes this activity at Etna so interesting (at least to me) is that both Bocca Nuova and the Southeast Crater were erupting simultaneous during some of these episodes, like on January 28, and this is the first time in over a decade that we've seen this double-barrelled action according to the Osservatorio. If you can imagine it, the Osservatorio report mentions periods with 3 or 4 craters were seeing simultaneous activity during the 1995-2001 eruptions. Mexico The results of yesterday's explosive eruption at Colima appear to be the destruction of a summit dome that started forming in 2007. The new summit crater formed by the January 6 and 30 eruptions is ~220 meters / 720 feet across and 50 meters / 150 feet deep based on an overflight performed yesterday after the latest explosion. The overflight also spotted new magma within the summit crater as well ... so just as quickly as the old dome in destroyed, a new dome begins to form. Philippines The small earthquake swarm at the Taal caldera marches on as well. Yesterday (1/30) the area felt 13 small earthquakes (although that number dropped to 3 for 1/31). Two of these earthquakes on January 30 were strong enough to be felt be people in the area and there were even reports of "rumbling sounds". However, many of the other telltales signs of renewed magmatic intrusion aren't present at Taal as crater lake waters don't seem to be warming or getting more acidic (although that is mitigated by surface water and precipitation as well). There has been slight inflation over part of the caldera since December and carbon dioxide emissions are slightly up since November, but on the whole, these earthquakes seem like "restless caldera" at its finest. Papau-New Guinea

Terra/MODIS image of the plume from the Tavurvur crater at Rabaul in PNG, January 20, 2013. Image: NASA. The airport near the Tavurvur crater in the Rabaul caldera has reopened after about a week of closure due to increased emissions from Tavurvur. It is actually fairly difficult to find information on the activity at Rabaul, so from what I can tell, the ash emissions have reduced to the point where air travel is allowed. The NASA Terra image of the area (see above) taken on January 20 shows the many volcanic features on the north and west side of the Rabaul caldera, along with the location of Rabaul town, cozy with the Tavurvur crater. Eruptions of Rabaul in 1937 and 1994 included activity from both the Tavurvur and Vulcan craters simultaneously. Odds and Ends - Lokon in Indonesia continues to produce small explosive eruptions. I find it interesting when an eruption makes the English-speaking media as the eruption today only produced a 800 meter / 2,600 foot plume and the PVMBG did not add any new evacuation orders for the area around Lokon. - If you haven't watched the interactive, 360º video taken from helicopter of the Tolbachik eruption, take the next 3 minutes to do so. Impressive to say the least. (Note: If you hold down the mouse while watching, you can change the direction the camera is pointing.) - The economic fallout from the 2010 Eyjafjallajökull eruption continues as the courts in EU have said that Ryanair is required to compensate passengers for the delays and cancellations caused by the ash from the eruption.