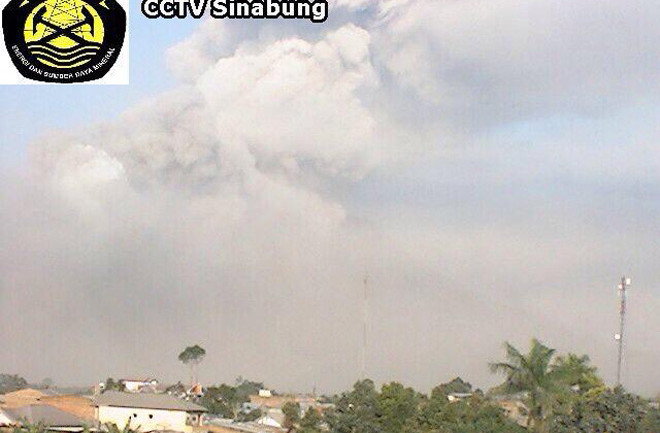 An explosion at Sinabung seen on the PVMBG webcam -- the low haze in the foreground is likely suspended volcanic ash while the plume in the background is the product of the collapsing lava dome on the volcano. Image: PVMBG webcam capture by James Reynolds. Brief updates on two ongoing eruptions: Indonesia The eruption at Sinanbung is still going strong and, if anything, getting stronger. Reports from the area detail a constant parade of pyroclastic flows and explosions (see above) as the dome at the summit continues to grow and collapse. You can watch some video of the pyroclastic flows (taken by people likely getting far too close to these very fast moving volcanic hazards). The explosion count over the past few days has been in the dozens per day -- and can see video of the activity and the results of the ash fall from these eruptions. The plume itself is consistently reaching 5 km (~16,000 feet) while the the pyroclastic flows are running outwards from the volcano to almost 5 km as well. The current tally of evacuees is over 26,000 and the Indonesian government announced today that they will be permanently relocating settlements that were within 3 km of Sinabung. Thus far, the eruption is estimated to have caused almost $60 million of damage to the croplands around the volcano as well, and one can imagine that damage to infrastructure and houses will far exceed that total. You can see the eruption as it continues on the PVMBG webcam pointed at Sinabung. Japan The eruption of Nishinoshima is also still rolling along, but thankfully without the same humanitarian crisis that we are seeing at Sinabung. The new island is now fully docked with the neighboring older island (see below) and appears to have what it takes to remain a permanent addition to the subaerial landscape. The Japan Coast Guard posted a great image of the new docked island, with a single active vent and a maze of lava flows with tall levees branching out from the vent. The amount of steam to the upper left of the vent suggests (to me) that lava flows are still being produced on the new island, but is a little hard to tell from this image of the same area seen from the sea on January 16.