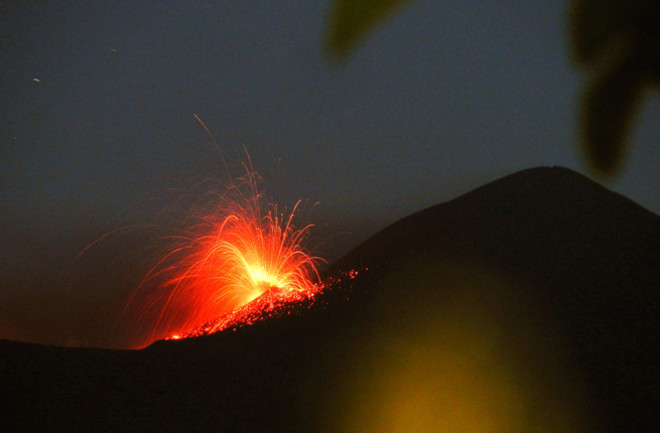 Etna in Italy, seen erupting on August 4, 2014. Photo by Dr. Boris Behncke / Osservatorio Etneo-INGV, used by permission. I've been busy in the SHRIMP-RG lab at Stanford for the last week, but I'm going to try to catch up on a few volcanic developments: Italy Both Etna and Stromboli have been in the news recently. Over at Etna, activity that had been occurring in the Northeast Crater has diminished over the course of July, but since August 9, new strombolian activity has resumed over in the New Southeast Crater. This activity produced a small ash plume and on August 10, a new lava flow started issuing from the New Southeast Crater. This activity continues into today. You can see the lava flow snaking down the slopes of the volcano along with the continuing strombolian activity on the INGV webcams. Dr. Boris Behncke also posted some great video of the eruption seen on August 2 - impressive strombolian explosions from Etna. Meanwhile, at Stromboli, explosive eruptions have continued with a lava flow that now reaches the sea. That lava flow put on quite a show for tourists passing nearby as explosions and a steam plume were produced as lava meets ocean water. Be sure to check out the INGV Stromboli webcams as well. Japan If you missed it last week, there was a new eruption from Japan's

Kuchinoerabujima on August 3. The initial eruption was quite impressive, with massive dark grey ash clouds coming from the vent. However, it wasn't that large of an eruption, with a ~1.5 km (5000 foot) ash and steam plume and has since quieted to a small ~50 meter steam plume from the active vent. This is the first eruption from

Kuchinoerabujima in 1980. Much of the known historic activity have been small explosive eruptions like these, rating VEI 1-2, although an eruption in 1933-34 was a VEI 4 eruption. IndonesiaSlamet in central Java entered a period of heightened unrest, with multiple explosive eruptions over the last few days. Most of the explosions were fairly small, with ash plumes only reaching 200-300 meters (650-980 feet) - likely strombolian eruptions. PVMBG has issued a 2-km exclusion zone around the volcano, but no evacuations for people living near Slamet.