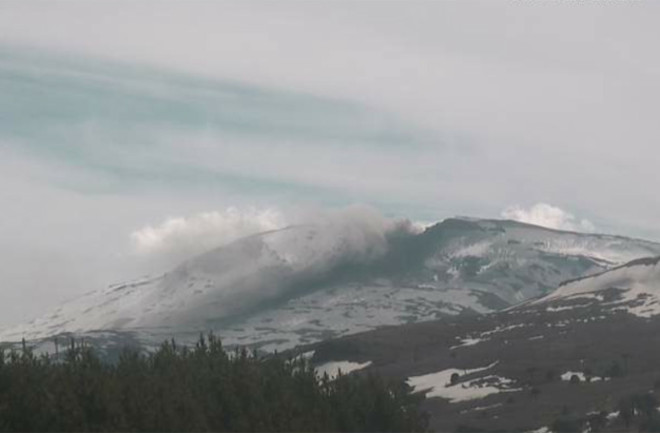 Webcam image of Copahue in Chile, seen on October 16, 2014. A small steam-and-ash plume can be seen along with deposits of fresh, dark grey across on the volcanoes slopes. Image: SERNAGEOMIN. I apologize for being missing for the last week. The big Geological Society of America meeting is next week in Vancouver BC and not only am I giving a talk and co-chairing a session, but two of my students are presenting posters. Needless to say, things have been busy. My talk centers on what zircon can tell us about the storage conditions and source magmas across the Cascade Range. I have zircon data from four Cascade volcanoes: St. Helens, Hood, South Sister and Lassen, it is a great chance to see how the differences in different parts of the Cascade arc might influence the composition of zircon. My two students are both presenting on their pieces of the Lassen Volcanic Center project, so we'll be presenting over 800,000 years of zircon data. Not only that, but I also built a volcano on the Denison campus, so if you missed the video of that, check it out. So, without further ado, here's some brief updates around the world of volcanoes: Iceland The Holuhraun lava field eruption is now one of the largest continuous eruptions in the past few centuries in Iceland here in its second month of activity. Lava flows and fountains are continuing on the plain between Barðarbunga and Askja while the Barðarbunga caldera itself is still subsiding at a rate of 30-40 cm/day. So far, that subsidence is over 0.75 cubic kilometers of lost volume below the caldera floor and large earthquakes are still occurring near the caldera. The biggest danger from this eruption so far has been the copious sulfur dioxide emissions that continue to cause problems for people in Iceland (depending on the winds). If you want to see some stunning images of the eruption, check these out -- especially some of the overhead shots of the lava flows. Also, there might be something lost in translation, but Haraldur Sigurðsson make the odd prediction that the eruption would end on March 4, 2015 -- a little too specific for my tastes. IndonesiaSinabung has entered back into a phase of more intense dome-collapse pyroclastic flows. This crisis at Sinabung has now lasted well over a year and local residents are running into problems with access to food and water. Not only that, but rainfall around the volcano combined with these eruptions has caused the threat of volcanic mudflows (lahars) to increase dramatically. The loose volcanic ash and debris is easily remobilized when heavy rains occur, creating a concrete-like slurry that can be very damaging and dangerous. On the opposite end of the spectrum, some of the pyroclastic flows have also triggered fires in the regions around Sinabung. Chile/ArgentinaCopahue has had a number of moderate explosive eruptions over the last week that prompted some minor evacuations of herders near the volcano. This is the third bout of explosive activity at the volcano since it became restless at the end of 2012. The alert status at Copahue is Orange and if you want to check out what is up there, use the SERNAGEOMIN webcam. Costa RicaPoás experienced a number of explosions as well. These mainly steam-driven events closed off the summit of the volcano to tourists for a few days, but access has been reopened after signs of the volcano settling down again - although the overall unrest continues. Be sure to check out the OVSICORI time-lapse video of the explosion as well. Hawaii The lava flow headed down the slopes of Kilauea towards Pahoa is still continuing to crawl forward. Now the flows are moving at ~25 meters/day, but the threat still remains for the flows to reach houses and roads if it continues to flow. The current estimate has the flow reaching Apaa Street in Pahoa around November 1. So far, the only damage the flows have caused is to vegetation. Italy

In case you missed it, be sure to read David Wolman's coverage of the appeal for the Italian geologists convicted in the aftermath of the L'Aquila earthquake. It still amazes me how much the Italian judicial system is willing to believe in charlatans and find scapegoats for an act of nature.