Eruption of Kadovar Is the First Surprise of 2018 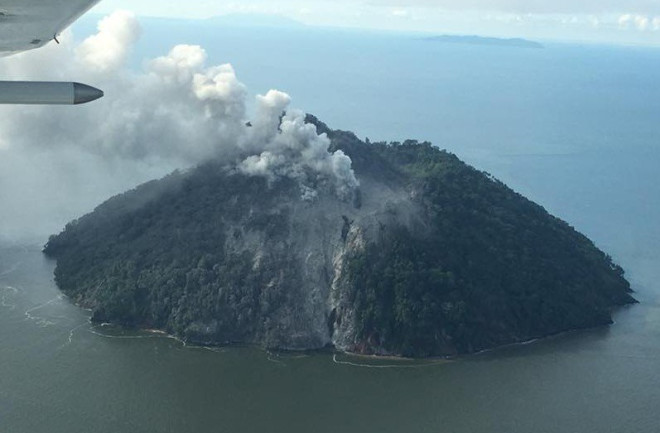 The smoldering crater at Kadovar in PNG, seen on January 6, 2018. It only took 6 days into 2018 before the first "surprise" volcano to erupt. Kadovar in Papua New Guinea erupted today, producing a volcanic plume of ash and volcanic gases that reached a few thousand meters (to ~7,000 feet) according to the report from the Darwin Volcanic Ash Advisory Center. The activity has been enough for local authorities to evacuate the people from the small village on the small island located 25 kilometers off the northern shores of New Guinea. However, rescuers did not find anyone where they expected when they arrived. An photo of the volcano taken today shows grey ash coating the upper parts of the steep edifice and the crater steaming vigorously (see below). UPDATE JANUARY 7, 2018: It appears that the 500-600 residents of the island have been evacuated, but details are sparse. Local reports suggest that half the island is covered in "lava". I think this is actually a mistranslation or misunderstanding and that this really means covered in ash or volcanic debris. With the potential for pyroclastic flows hitting the sea around the island or even a landslide from the volcano failing, the Rabaul Volcano Observatory has warned that there is a potential for a tsunami to be generated if the eruption continues.

First known #eruption of #Kadovar#volcano in Papua New Guinea #PNG prompts #evacuation of 500 people after sending a column of ash 7000 feet in the air https://t.co/ocUNAkkP48 via @Strange_Soundspic.twitter.com/hksnpP2zET

Video of the eruption

taken from a small airplane shows the dark grey plume (along with a white steam plume) from the crater. Much of the island looks to be coated in grey ash in the video and trees on the side facing the airplane looked to be stripped of foliage as well. Some areas looked like they may have already seen some minor pyroclastic flow activity as well. Local reports also mention ash falling on the nearby islands as well. Kadovar

is an andesitic volcano, so the lavas erupted are relatively sticky, meaning we likely could expect dome growth followed by collapse generating pyroclastic flows from the volcano if the eruption continues. This would be similar to the nearby PNG volcano Manam

. There are no confirmed historic eruptions

from Kadovar, so there was little in the way of monitoring for the volcano prior to these new ash emissions.