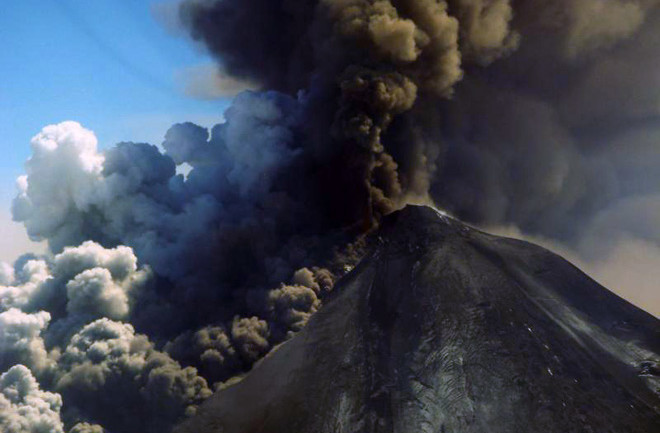 The eruption of Pavlof in Alaska, seen on May 18, 2013. Image: Theo Chesley, via AVO/USGS. The eruption that started last week at Pavlof, at the far western end of the Alaska Peninsula, is still going strong. AVO says that the lava flows and fountains are continuing, with steam-and-ash plumes reported to be reaching in 5-6 km (low 20,000s feet). However, they did note that the plume doesn't seem to be very ash rich as much of the volcanic material is staying closer to the summit of the volcano -- but that didn't stop some ash dusting towns as far away as Sand Point, 88 km (55 miles) to the east. Some images of the eruption (see above) clearly show the white plume that is likely mostly derived from melting snow and the dark grey plume made of volcanic ash and tephra. The activity is still producing small pyroclastic flows from snow-lava interactions and lahars further downslope as the volcanic debris mixes with melted snow/ice -- be sure to check out the image of Pavlof taken May 16 over on the NASA Earth Observatory showing all these features. The seismicity (volcanic tremor) at Pavlof is almost constant, so there don't seem to be many signs that the eruption is nearing an end -- the current level of activity is likely the new normal at Pavlof for the time being, with some potential for explosions that might produce plumes reaching 9 km. You can check out some impressive video taken from an aircraft flying near Pavlof -- they clearly show the fountain of lava and ash at the crater along with the billowing clouds of ash and steam flowing down the slopes. Also, check out this gallery of images put together by the Alaska Dispatch. Still pretty cloudy on the webcam view from Cold Bay, but keep an eye on it to look for the plume from Pavlof. (Programming note: I'll be out of town on a trip Tuesday to Thursday, so no new posts until Friday.)