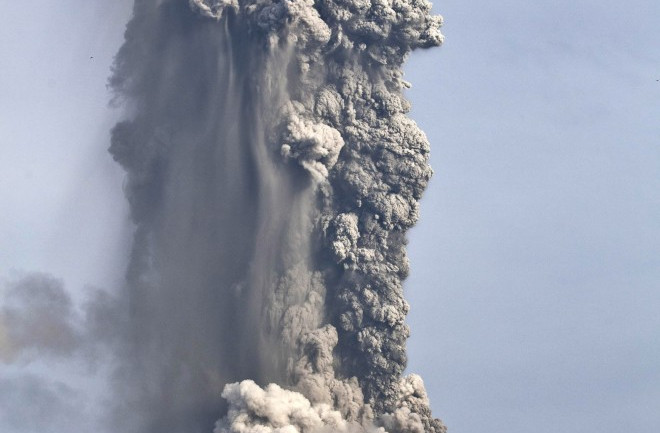 Mount Sinabung spews pyroclastic smoke as seen from Tigapancur village in Karo district on November 14, 2013 in Medan, Sumatra, Indonesia. Up to 4,300 residents have been evacuated from five villages in North Sumatra due to the volcanic eruptions of Mount Sinabung. The volcano has been erupting for several days, spewing ash and lava 2.5 miles into the sky. Photo: Ulet Ifansasti/Getty Images (Note: This is a first try at a "stub" article about ongoing volcanic activity. Feel free to add additional information and comments after the post). The eruption at Sinabung has continued to intensify over the last week. The latest explosive plumes from the Indonesian volcano have topped 5-7 km (16,500-23,000 feet). All this activity has caused over 5,300 people to be evacuated from the region around the volcano, and as with any extended evacuation, issues with food and water access are occurring. Additionally, the farmland around Sinabung has been heavily damaged by the ash fall. The eruption has also started to produce small pyroclastic flows (see right) that have moved down the slopes of the volcano, so the 5 km exclusion zone may expand if that threat continues to grow. The farthest any of these flows have travelled so far is ~1.2 km (0.75 miles). Some lahars have also been produced from the eruption, although this Getty picture incorrectly refers to it as a "cold lava flow." UPDATE 11:30 AM EST: Check out this new image of the eruption plume from Sinabung from today (see above; via Lava Robin and Anthony Sagliani). You can see additional small pyroclastic flows on the flanks of the volcano, likely caused by parts of the column collapsing. Also, note the strong ash fall on the left side of the plume. The plume isn't particularly tall (you can see it spread laterally at the very top of the image), so my guess is it is still in the range of the 5-7 km we've been seeing. What is great about this image is you can really see the pieces of an eruption column clearly (see below). Right at the vent, the column is being forced out at high velocities merely through gas thrust of fragmenting magma. As it rising buoyancy, it slows down in the convection zone rapidly, but continues to go up because it is hot (and has some momentum). It finally reaches the point of neutral buoyancy where the plume stops mostly moving upwards but rather moves outwards into the umbrella region. In this image, the umbrella region is clipped off at the top of the shot.

Schematic representation of the Sinabung eruptive column showing some of the main eruptive features. Image: Erik Klemetti Check out the Sinabung webcam to see if you can see some of this ongoing activity.