[Update to my note; the blog software upgrade is tomorrow, Wednesday, not today. Sorry for the confusion, BABloggees! The Hive Overmind is doing a blog upgrade today from about 9 a.m. to 2 p.m. Eastern time, and during that period commenting will be turned off. Don't panic!]

Scientists using data from the Cassini spacecraft have found something amazing: a lightning storm on Saturn that's lasted for nearly eight months! And it's still going. Long lasting storms on planets aren't unusual; the Great Red Spot on Jupiter is at least 400 years old! But active lightning storms are more difficult to detect... unless you happen to be close by. Giant lightning bolts create vast discharges of radio energy, and Cassini's has an instrument sensitive to them. It's been monitoring Saturn for about five years now, and has seen lots of lightning storms. The previous record holder was 7.5 months, for a system that lasted from November 2007 to July of last year. This new one has been raging since February, and shows no signs of abating. Storms on Saturn are a bit more violent than on Earth: they can be 3000 km (1800 miles) across, and discharge energy at rates 10,000 times higher than storms here on Earth! Yikes.

Sure, this stuff is cool -- giant killer electrical storms , woohoo! -- but it's also science. As these waves of energy plow through Saturn's ionosphere, scientists can use them to map out the structure of Saturn's environment and learn how the giant planet behaves. That's really the whole point, of course. That, plus planet-spanning disaster-movie sized lightning storms! Cooooool. 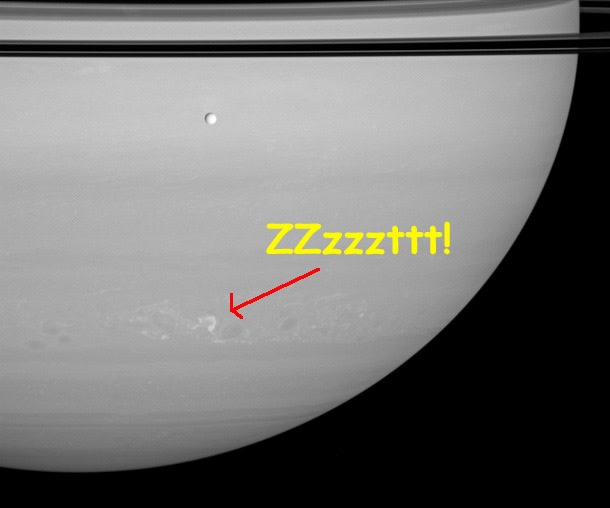