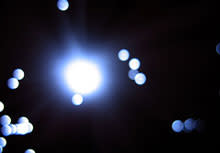 Of all the weirdness in the universe, the quantum mechanics phenomenon called "entanglement" may be the most mind-boggling. Physicists have long shaken their heads at the theory that two particles that become entangled will always and instantly mirror each other's properties, no matter how far they are separated, which seems to go against all other physical understanding.

In the everyday world, objects can organize themselves in just a few ways. For example, two people can coordinate their actions by talking directly with each other, or they can both receive instructions from a third source.... But quantum mechanics allows for a third way to coordinate information [Nature News].

Einstein rebelled against the notion of quantum entanglement, derisively calling it "spooky action at a distance"

Entanglement would look a lot less spooky if we could prove that an entangled object releases an unknown particle or some other signal at high speeds to influence its partner, giving the illusion of a simultaneous reaction [LiveScience].

But a new study shows that if some hidden signal is passing between the separated particles, it would have to travel at 10,000 times the speed of light. As this explanation seems impossible, the research team favors the alternate, weirder idea:

that a measurement on one photon instantly influences the other [New Scientist].

entangled [his] photon pairs using a source in Geneva, then passed them through fibre-optical cables of exactly equal length to the villages of Jussy and Satigny, which lie respectively east and west of Lake Geneva. Here, the photons' entanglement was checked by an identical pair of instruments to reveal consistent entanglement of their photons, and the effects of the Earth's rotation taken into account [Telegraph].

The study, published in the journal Nature [subscription required], shows that the particles did indeed mirror each other's properties at the exact same moment even though they were 11 miles apart. The research team says their finding disproves the more comprehensible hypothesis--that the particles were sending signals at faster-than-light speed--and instead supports the stranger theory of instant communication. Dr Terence Rudolph of Imperial College, London, remarks that "any theory that tries to explain quantum entanglement... will need to be very spooky - spookier, perhaps, than quantum mechanics itself"

For a look at what quantum entanglement means for the potential to teleport ourselves, check out the recent DISCOVER article, "Teleportation? Very Possible. Next Up: Time Travel."