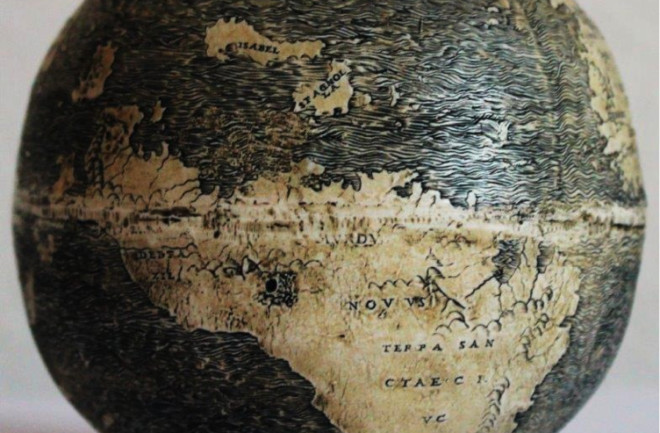 Here's North America, folks--just two tiny islands surrounded by what must have seemed like endless ocean. Image credit: Washington Map Society The first known globe to include the New World was recently found at a London map fair---an impressive 500 year survival for it being engraved into ostrich eggs. According to analysis by an independent Belgian scholar, Stefaan Missinne, the globe not only predates the previous record holder---a globe made of copper alloy between 1504 and 1506, now on display at the New York Public Library---but the evidence suggests it was actually the model used to cast that previous record holder. The two globes are identical down to their smallest details, from the wave patterns on the ocean to the disproportionate size of continents. The handwriting is the same, and even the typos match up: "HISPANIS" instead of HISPANIA and "LIBIA INTEROIR" in place of LIBIA INTERIOR.

The grapefruit-sized globe was spotted at the London map fair in 2012 by an anonymous globe and map collector. By that point it had already passed through two dealers' hands since being purchased from an unnamed but apparently important European collection. Due to these layers of mystery, globe expert Stefaan Missinne was called in to figure out if the globe was legitimate, and if so, when and where it originated. The globe's northern and southern hemispheres each came from the round bottom half of an ostrich egg. To figure out its age, Missinne sent the globe to a radiologist who used CT scans to measure the bone density loss in the shell. By comparing the density to that of modern ostrich eggs, and eggs of known ages in museum collections, Missinne calculated the rate an ostrich egg loses bone density: about 10 percent each century. This means the ostrich egg globe would have been engraved around the year 1500, consistent with the idea of it being the cast for the copper globe. And since copper can be melted but egg cannot, the egg would have had to come first.

Ahead of Its Time

Whoever made the globe had access to the latest information about explorers from all the European countries vying for world domination. Many explorers were just returning from their journeys that profoundly changed the way people saw and understood the world. The shape of the Asian peninsula, for example, reflects the explorations of Italian Henricus Martellus, and the two tiny islands of North America were those happened upon by Christopher Columbus. Other details reflect the then-recent exploratory accounts of Marco Polo, the Corte-Reals, Cabral, and Amerigo Vespucci, who coined the name New World, or "MVNDVS NOVVS" as it is labeled on the globe. Missinne suspects the globe was engraved by an Italian hand, as he describes in the cartography journal Portolan today. The scholar points specifically to Florence which, in 1500, was the richest city in Europe and a renowned map-making hub. Feuding families in positions of power funded exotic artistic and cultural projects, so an ostrich egg globe of the newly discovered lands would have been right up their alley.

Detail of a ship in the eastern Indian Ocean on the egg globe. Image credit: Washington Map Society

The Drama is in the Details

Another creative force in Florence at the time was Leonardo Da Vinci. The lack of New World references in Da Vinci's writings, and the artist's inexperience with engraving, suggest to Missinne that Da Vinci could not have been the globemaker himself. Still, the great thinker's influence is apparent. The transfer of the map from paper to globe appears to have been done via Da Vinci's unique method for transferring a 2-dimensional drawing to a 3-dimensional sphere by slicing it into triangles. Apart from the new lands depicted on the globe, the waters tell their fair share of stories, too. In the Indian Ocean, for example, a sole ship is shown tossed on the waves, its origin and destination unknown. And off the coast of Southeast Asia, the Latin legend warns of a legendary monster: “HIC SVNT DRACONES” it says; Here there are dragons.