Engineers discover a new use for tampons: as pollution detectors! 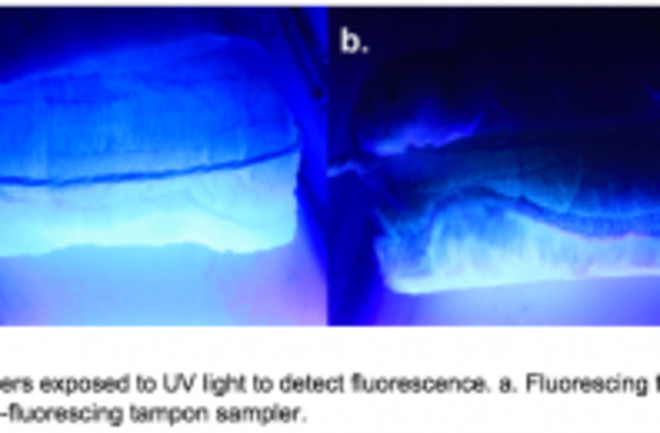 Although we all know that pollution from sewers is generally bad for ecosystems, actually figuring out if there is a wastewater leak can be challenging. Because of their ubiquitous use in household products, finding optical brighteners (“OBs”: chemicals found in shampoo and other soaps, and even toilet paper) in streams and rivers can be used as a sign of wastewater pollution. However, because these compounds are so commonly used, finding absorbent materials that don’t have them makes using optical brighteners as markers of pollution difficult. Enter the tampon: tampons are generally made from untreated cotton and are therefore free of OBs. According to this study, tampons readily absorb OBs, making them glow when exposed to UV light (see image above). This simple test is not only cheap, but very effective — even small amounts of optical brighteners can be detected in streams and rivers by using “tampon samplers” (tampons tied to a string and literally hanging into the sewer pipe). Who knew scientists were so good at finding new uses for tampons?

“Sewer misconnections lead to discharge of wastewater direct to rivers and streams. They are difficult to detect due to their intermittent discharges and the wide range of compounds which can be discharged. Optical brighteners are strong indicators of the presence of sewer misconnection discharge in surface water sewers, representative of many components of misconnections, and easily identified. The authors have developed and tested a promising method to identify optical brighteners in sewer systems using inexpensive passive samplers and a simple analysis method. The method is used to identify large areas of four sewer systems which are polluted with misconnection discharge. Limited validation shows that the method successfully indicated diffuse pollution in the surface water sewer system.”

Bonus quote from the Materials and Methods:

“Laboratory testing was performed to determine concentrations of detergent at which fluorescence would be observed. Twenty five microliters of detergent, the smallest volume which could accurately be measured, were added to 25 L of tap water. A tampon was submerged in the container for 5 s. OBs adsorbed to the tampon immediately and were still identifiable up to 30 days after initial exposure (Fig. 1). Modern washing machines discharge between 29 and 144 L of water per use, with an average of 77 L. This equates to roughly 0.65ml of detergent per litre of discharged water if manufacturers recommendations for the volume of detergent used in an average laundry load are used. This, therefore, means that even with a 300 times dilution in the sewer pipe, which is far beyond anything which could be expected from normal sources, polluted discharge would still be observable.”