End of the Voyagers 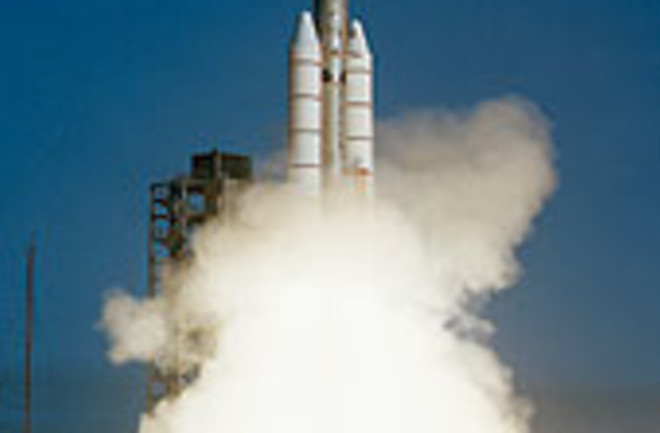 A Titan III Centaur rocket lifts off September 5, 1977, with Voyager 1 as its payload. | Courtesy of NASA/Marshall Space Flight Center

In January, the twin Voyager space probes each passed a remarkable milestone: 10,000 days of continuous mission operations. Those triumphs may be the last thing Voyager scientists have to celebrate. NASA says it’s shutting down both missions to save more than $4 million. Additionally, the agency plans to turn off five American solar probes and stop paying for its portion of the Ulysses solar probe, operated jointly with the European Space Agency. Savings: another $19 million.

Launched in 1977, Voyager 1 and Voyager 2 are heading on different paths toward interstellar space. Their original mission, a “grand tour” past Jupiter, Saturn, Uranus, and Neptune, ended in 1990. Since then, the Voyagers have gone on to investigate the outer reaches of the heliosphere, the giant magnetic bubble created by the sun that envelops the solar system.

The Voyagers’ longevity is not uncommon; other probes have returned valuable science long past their expiration dates. At press time, the Mars rovers Opportunity and Spirit were soldiering on nearly a year after the end of their original mission. The Jupiter probe Galileo, launched in 1989, lasted through four years of extended missions exploring the moons Europa and Io before burning up in a planned plunge into Jupiter’s atmosphere in September 2003.

“The cuts are not certain,” says NASA spokeswoman Gretchen Cook-Anderson. The trims were based on a 2003 senior-level review of the space science program (which, as a whole, gets a funding boost in NASA’s 2006 budget), she says. Another senior review will be conducted before any final decisions are made, although that review has not yet been scheduled.

Voyager mission scientists are worried. “We’ll just have to see how the review comes out,” says Ed Stone of Caltech, chief scientist for the Voyager project. “I’m concerned because this is the only chance we’re going to get for several decades to understand how our sun interacts with the surrounding material in the galaxy. It has already taken us 27 years to get where we are, and there is no mission currently under way that would replace it. It is literally a once-in-a-lifetime opportunity.”