ENCODE: the rough guide to the human genome 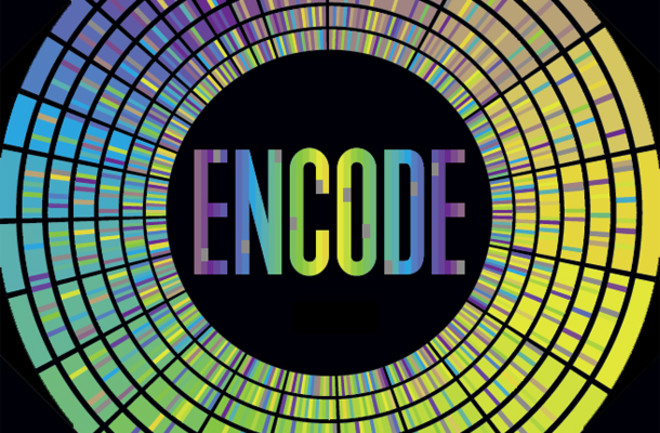 Back in 2001, the Human Genome Project gave us a nigh-complete readout of our DNA. Somehow, those As, Gs, Cs, and Ts contained the full instructions for making one of us, but they were hardly a simple blueprint or recipe book. The genome was there, but we had little idea about how it was used, controlled or organised, much less how it led to a living, breathing human.

That gap has just got a little smaller. A massive international project called ENCODE – the Encyclopedia Of DNA Elements – has moved us from “Here’s the genome” towards “Here’s what the genome does”. Over the last 10 years, an international team of 442 scientists have assailed 147 different types of cells with 24 types of experiments. Their goal: catalogue every letter (nucleotide) within the genome that does something. The results are published today in 30 papers across three different journals, and more.

For years, we’ve known that only 1.5 percent of the genome actually contains instructions for making proteins, the molecular workhorses of our cells. But ENCODE has shown that the rest of the genome – the non-coding majority – is still rife with “functional elements”. That is, it’s doing something.

It contains docking sites where proteins can stick and switch genes on or off. Or it is read and ‘transcribed’ into molecules of RNA. Or it controls whether nearby genes are transcribed (promoters; more than 70,000 of these). Or it influences the activity of other genes, sometimes across great distances (enhancers; more than 400,000 of these). Or it affects how DNA is folded and packaged. Something.

According to ENCODE’s analysis, 80 percent of the genome has a “biochemical function”. More on exactly what this means later, but the key point is: It’s not “junk”. Scientists have long recognised that some non-coding DNA has a function, and more and more solid examples have come to light[edited for clarity – Ed]. But, many maintained that much of these sequences were, indeed, junk. ENCODE says otherwise. “Almost every nucleotide is associated with a function of some sort or another, and we now know where they are, what binds to them, what their associations are, and more,” says Tom Gingeras, one of the study’s many senior scientists.

And what’s in the remaining 20 percent? Possibly not junk either, according to Ewan Birney, the project’s Lead Analysis Coordinator and self-described “cat-herder-in-chief”. He explains that ENCODE only (!) looked at 147 types of cells, and the human body has a few thousand. A given part of the genome might control a gene in one cell type, but not others. If every cell is included, functions may emerge for the phantom proportion. “It’s likely that 80 percent will go to 100 percent,” says Birney. “We don’t really have any large chunks of redundant DNA. This metaphor of junk isn’t that useful.”

That the genome is complex will come as no surprise to scientists, but ENCODE does two fresh things: it catalogues the DNA elements for scientists to pore over; and it reveals just how many there are. “The genome is no longer an empty vastness – it is densely packed with peaks and wiggles of biochemical activity,” says Shyam Prabhakar from the Genome Institute of Singapore. “There are nuggets for everyone here. No matter which piece of the genome we happen to be studying in any particular project, we will benefit from looking up the corresponding ENCODE tracks.”

There are many implications, from redefining what a “gene” is, to providing new clues about diseases, to piecing together how the genome works in three dimensions. “It has fundamentally changed my view of our genome. It’s like a jungle in there. It’s full of things doing stuff,” says Birney. “You look at it and go: “What is going on? Does one really need to make all these pieces of RNA? It feels verdant with activity but one struggles to find the logic for it.

Think of the human genome as a city. The basic layout, tallest buildings and most famous sights are visible from a distance. That’s where we got to in 2001. Now, we’ve zoomed in. We can see the players that make the city tick: the cleaners and security guards who maintain the buildings, the sewers and power lines connecting distant parts, the police and politicians who oversee the rest. That’s where we are now: a comprehensive 3-D portrait of a dynamic, changing entity, rather than a static, 2-D map.

And just as London is not New York, different types of cells rely on different DNA elements. For example, of the roughly 3 million locations where proteins stick to DNA, just 3,700 are commonly used in every cell examined. Liver cells, skin cells, neurons, embryonic stem cells… all of them use different suites of switches to control their lives. Again, we knew this would be so. Again, it’s the scale and the comprehensiveness that matter.

“This is an important milestone,” says George Church, a geneticist at the Harvard Medical School. His only gripe is that ENCODE’s cells lines came from different people, so it’s hard to say if differences between cells are consistent differences, or simply reflect the genetics of their owners. Birney explains that in other studies, the differences between cells were greater than the differences between people, but Church still wants to see ENCODE’s analyses repeated with several types of cell from a small group of people, healthy and diseased. That should be possible since “the cost of some of these [tests] has dropped a million-fold,” he says.

The next phase is to find out how these players interact with one another. What does the 80 percent do (if, genuinely, anything)? If it does something, does it do something important? Does it change something tangible, like a part of our body, or our risk of disease? If it changes, does evolution care?

[Update 07/09 23:00 Indeed, to many scientists, these are the questions that matter, and ones that ENCODE has dodged through a liberal definition of “functional”. That, say the critics, critically weakens its claims of having found a genome rife with activity. Most of the ENCODE’s “functional elements” are little more than sequences being transcribed to RNA, with little heed to their physiological or evolutionary importance. These include repetitive remains of genetic parasites that have copied themselves ad infinitum, the corpses of dead and once-useful genes, and more.

To include all such sequences within the bracket of “functional” sets a very low bar. Michael Eisen from the Howard Hughes Medical Institute said that ENCODE’s definition as a “meaningless measure of functional significance” and Leonid Kruglyak from Princeton University noted that it’s “barely more interesting” than saying that a sequence gets copied (which all of them are). To put it more simply: our genomic city’s got lots of new players in it, but they may largely be bums.

This debate is unlikely to quieten any time soon, although some of the heaviest critics of ENCODE’s “junk” DNA conclusions have still praised its nature as a genomic parts list. For example, T. Ryan Gregory from Guelph University contrasts their discussions on junk DNA to a classic paper from 1972, and concludes that they are “far less sophisticated than what was found in the literature decades ago.” But he also says that ENCODE provides “the most detailed overview of genome elements we’ve ever seen and will surely lead to a flood of interesting research for many years to come.” And Michael White from the Washington University in St. Louis said that the project had achieved “an impressive level of consistency and quality for such a large consortium.” He added, “Whatever else you might want to say about the idea of ENCODE, you cannot say that ENCODE was poorly executed.” ]

Where will it lead us? It’s easy to get carried away, and ENCODE’s scientists seem wary of the hype-and-backlash cycle that befell the Human Genome Project. Much was promised at its unveiling, by both the media and the scientists involved, including medical breakthroughs and a clearer understanding of our humanity. The ENCODE team is being more cautious. “This idea that it will lead to new treatments for cancer or provide answers that were previously unknown is at least partially true,” says Gingeras, “but the degree to which it will successfully address those issues is unknown.

“We are the most complex things we know about. It’s not surprising that the manual is huge,” says Birney. “I think it’s going to take this century to fill in all the details. That full reconciliation is going to be this century’s science.”