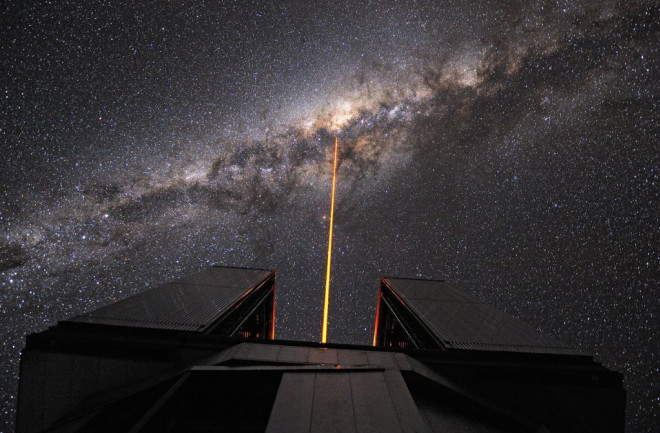 The Very Large Telescope array uses a laser guide star and four connected, infrared telescopes to astronomers can pierce the turbulent core of our galaxy and study the supermassive black hole that lurks there. (Credit: G. Hüdepohl (atacamaphoto.com)/ESO) Astronomers have long had their eye on a group of stars that precariously circles just outside the supermassive black hole at the heart of our Milky Way galaxy. And, in a discovery announced by the European Southern Observatory on Thursday, scientists say they've finally spotted one of these stars as it travels through the black hole’s gravitational field. It's the first test of Albert Einstein's theory of general relativity near a supermassive black hole. The event, recorded in incredible detail, reveals how the extreme gravitational pull of a black hole affects light. Einstein suspected that a black hole might be powerful enough to lower the frequency of light under extreme circumstances, and once again his theory has withstood the test. The announcement was made at the European Southern Observatory (ESO) headquarters in Garching, Germany. At the press conference, ESO researcher Frank Eisenhuer compared the predicted redshift as outlined by Einstein to what was observed – with the data aligning near perfectly. The crowd broke out into applause. “In sports, as you would say, it’s a win for Einstein,” says Eisenhuer. For decades, scientists have monitored a black hole called Sagittarius A*, which dwells at the center of the Milky Way. Its mass is four million times larger than that of our sun. And its orbited by a mysterious group of stars. On May 19, 2018, one of those orbiting stars, called S2, passed through Sagittarius A*'s gravitational field, providing scientists with a prime opportunity to study whether a phenomenon predicted by Einstein, dubbed gravitational redshift, takes place under the most extreme cases. Gravitational redshift happens as light travels across gravitational fields and loses some of its energy, causing it to shift toward the red, or lower, end of the spectrum. As the light increasingly feels the pull of gravity, it must work harder to keep at a constant speed. So rather than oscillating at its original frequency, its wavelength is stretched in a way, becoming longer. Scientists have long hoped to observe how this phenomenon plays out within the realm of a black hole. However, Sagittarius A* lies some 26,000 light years away from us, and is hidden behind large clouds of dust. But recently, the European Southern Observatory (ESO) endowed their Very Large Telescope array (VLT) with a new tool. Called GRAVITY, it combines light harvested by VLT's four telescopes, yielding 15 times the resolving power and accuracy that just one of the telescopes could accomplish alone. Such resolution is equivalent to observing a tennis ball on the moon from Earth. This let astronomers make hour-by-hour measurements as the S2 star made its latest flyby of Sagittarius A*. They watched what happened as S2 approached the black hole, coming tantalizing close, cosmically speaking, at about 12 billion miles away. During this close encounter, S2 reached speeds of nearly 5,000 miles (8,000 kilometers) per second, which is equal to 2.7% the speed of light. The ESO team compared these new data with previously collected data on S2 to understand how its light was altered by dipping into the intense gravitational field. This is how they confirmed that light emitted from the star becomes less energetic – drained if you will – due the pull of the black hole and shifts to a lower frequency. “This is the second time that we have observed the close passage of S2 around the black hole in our galactic center. But this time, because of much improved instrumentation, we were able to observe the star with unprecedented resolution,” explains Reinhard Genzel of the Max Planck Institute for Extraterrestrial Physics. “We have been preparing intensely for this event over several years, as we wanted to make the most of this unique opportunity to observe general relativistic effects.” At the press conference Odele Staub from the Paris Observatory, explains, “Why is this important, why did we do this at all? Gravity is a fundamental property of the universe. Understanding gravity here on Earth, in the solar system, in the Milky Way, outside of the Milky Way – this is key to understanding our universe. “We looked at our galactic center and what we saw, is yes, it behaves like Einstein’s black hole. What we measured cannot be described by Newton anymore.” In the coming months, the researchers also plan to monitor how this encounter may have shifted S2’s trajectory, which will yield insights into the mass distribution of Sagittarius A*, the black hole that we love to admire from afar.