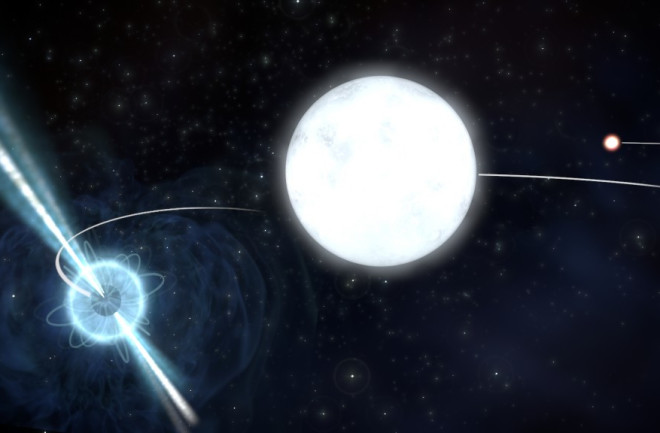 The pulsar and the inner white dwarf are in a 1.6-day orbit. This pair is in a 327-day orbit with the outer white dwarf, much further away. (Credit: SKA organization) Albert Einstein’s been having quite a few weeks! First his “imaginary elevator” thought experiment was confirmed with unprecedented precision, then his theory of relativity was shown to create gravitational lenses as expected even in other galaxies. And today, we learn that a central tenet of relativity still holds even at gravitational extremes. It’s no annus mirabilis, but it ain’t bad. Today’s news, which appears in the journal Nature, concerns the equivalence principal, which roughly says that falling objects should all fall the same way. It sounds obvious put that way, of course, but the idea that heavier objects should fall at the same rate as lighter objects (discounting air resistance) still surprises people. The idea is that gravity accelerates heavier objects faster, sure, but because they’re more massive it’s harder for them to accelerate, so the two effects cancel out. Galileo famously (and likely apocryphally) demonstrated the principal by dropping lead balls of different weights off the Leaning Tower of Pisa and observing them hit the ground at the same time. Apollo 15 astronaut David Scott recreated it on the moon, dropping a feather and a hammer; the two indeed hit the ground at the same time. “How ‘bout that!” he says in reaction. And that’s basically what astronomers have done today, just recreated that experiment once again. Only this time, instead of a hammer and feather, they used a pulsar and a white dwarf.

Some 4200 light-years away in the constellation Taurus lies a triple star system named PSR J0337+1715. It consists of two white dwarfs, small stars just a fraction of the mass of our sun, and a much tinier, denser pulsar. The pulsar and one of the white dwarfs orbit each other closely, and the second white dwarf has a much bigger orbit around them. This turns out to be the perfect laboratory for scientists to test just how far the equivalence principle goes.

(Credit: Anne Archibald) Einstein’s general relativity assumes not just the regular equivalence principle, but a specific version of it called the strong equivalence principle. According to relativity, gravity works by warping space-time itself, and anything with mass would exude gravity. So dense enough objects, such as pulsars, aren’t just passive passengers riding on space-times curves — they’re actively warping it themselves, too. The strong equivalence principle states that even these objects would fall at the same rates as others, too. By looking at PSR J0337+1715 for about six years, the paper’s authors can see whether or not that’s the case: If Einstein, and the strong equivalence principle, are right, then the inner pulsar-white dwarf pair should be stable, and the outer white dwarf’s gravity would affect them both the same. If Einstein’s wrong, then the scientists would see some kind of wobble as the neutron’s own gravity affects its orbit around the white dwarf.

Spoiler: Einstein won! He pretty much always wins. The team saw exactly what they’d expect to see if the strong equivalence principle is right, no anomalies or weirdness, with a margin of error of only 30 meters, according to a university video explaining the findings. This finding rules out several alternative theories, including some versions of string theory. It also confirms that our current understanding of gravity, the general theory of relativity, remains a reasonable way to understand the universe. “Tests of this principle have a long heritage,” says Clifford M. Will in a Nature article accompanying the paper. “It is quite extraordinary that the responses of different materials to gravity should be so similar. In Einstein’s unique imagination, there was a reason: gravity is not a force that acts on all of these particles in some fantastically fine-tuned manner, but is simply an effect of space-time geometry. The constituents of matter follow universal paths in a space-time that is curved by massive bodies.” Maybe one day we’ll have to discard Einstein’s theories for something better, but for now they’re still here to stay.