Einstein in the Sky With Pulsars 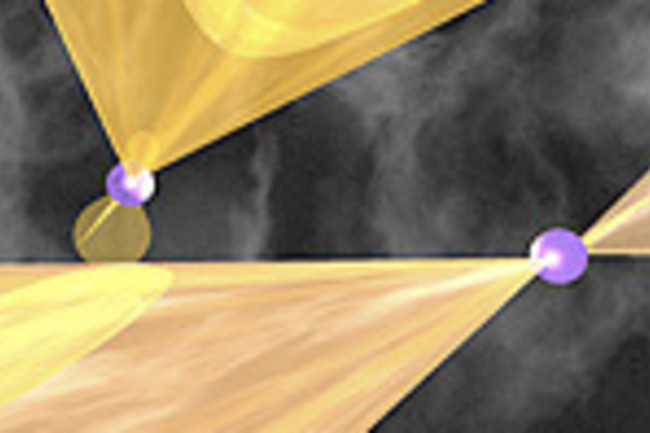 The faster of the two pulsars rotates 45 times per second, while the slower spins only 22 times per minute. The two will coalesce in about 85 million years. | Courtesy of Michael Kramer (Jodrell Bank Observatory, University of Manchester)

Albert Einstein’s theories have led to all kinds of fantastic insights, including the prediction that an accelerating mass creates ripples in the structure of space, disturbances known as gravitational waves. Various studies have yielded tantalizing confirmations that these ripples really exist, but now Andrew Lyne, director of the Jodrell Bank Observatory in the United Kingdom, is using an exotic type of double star to study gravitational waves with great precision.

Lyne’s object consists of two pulsars, extremely dense stellar cinders that emit beams of radiation as they spin. As the stars swoop around each other once every two and half hours, theory predicts, they emit a torrent of gravitational waves that suck out energy and subtly cause the pulsars to speed up. Measuring the orbital period should be easy because during each circuit the larger pulsar—more massive than the sun yet just 12 miles in diameter—detectably distorts radiation from the smaller one. By studying the motions of the two stars, Lyne has confirmed the quickening orbit and deduced three other ways to measure the effects of general relativity. So far all of the data seem to confirm Einstein’s predictions. But Lyne is looking for minuscule deviations that could reveal where Einstein’s ideas remain incomplete. “Over the next few years we’ll be able to improve the precision of our data sets, and it’s quite possible that Einstein’s theory may need to be adjusted a bit,” he says.