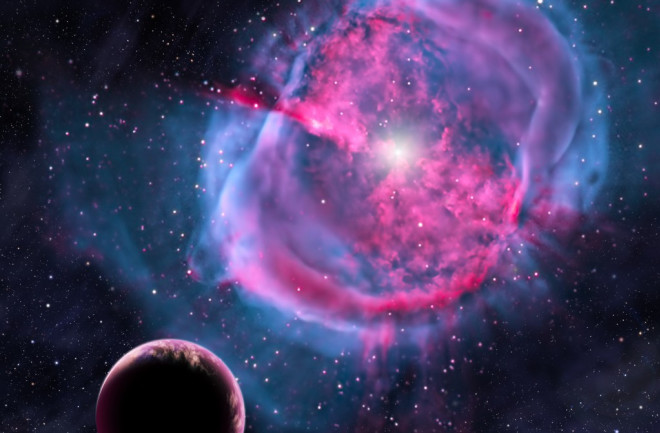 This artist's conception depicts an Earth-like planet orbiting an evolved star that has formed a stunning "planetary nebula." Credit: David A. Aguilar (CfA) The search for a planet like our own Earth just got one step closer to the ultimate goal. Astronomers have confirmed three more exoplanets orbiting their stars in the habitable zone — where the temperature is just right for liquid water to exist on a planet’s surface. They also added five worlds that are likely in their stars’ habitable zones. This new crop of planets nearly doubles the number of worlds up to twice Earth’s size in habitable zones. And it includes two of the most Earth-like planets yet discovered.

The observations came from the Kepler telescope, which stared at the same patch of sky for four years between 2009 and 2013. Specifically, Kepler was tracking tiny drops in light as planets crossed in front of their stars. While Kepler has found 1,004 confirmed exoplanets and another 4,175 possible worlds, it also sees objects that turn out to be false-positives — such as distant background stars that are eclipsed by other stars. To verify that Kepler’s possible planets are actually there, astronomers then have to further observe the objects with ground-based telescopes and run advanced computer simulations. Guillermo Torres of the Harvard-Smithsonian Center for Astrophysics and colleagues used both of these methods to verify the eight new worlds and analyze three previously confirmed ones. The new planets all orbit stars smaller and cooler than the Sun and therefore have habitable zones that lie closer to their star. Five are smaller than two times Earth’s width, which means they’re much more likely to be rocky instead of gaseous.

The scientists found that two of these newly verified exoplanets look especially Earth-like – in fact, argue the scientists, the most similar ones found to date. The first, known as Kepler-438b, is only slightly larger than Earth but orbits much more closely to its sun, which it circles in just 35 days. That means it receives about 40 percent more light than Earth. Light is important as a factor in habitability: Too much, and water would boil away; too little, and water will freeze. The researchers also believe, from their computer simulations, that Kepler-438b has a 70 percent chance of being a rocky world, like Mars, Earth, Venus, and Mercury are. A slightly larger exoplanet, Kepler-442b, clocks in at about 1.34 times our planet’s width. It has a 112-day year and receives about two-thirds as much light as Earth. The researchers believe this world is also likely rocky. And they give it pretty strong chances of being habitable: According to their calculations, its 97 percent certain that it has the physical conditions to allow liquid water.

“Growing this sample really helps us to make a more accurate estimate of the frequency of small habitable zone planets in the galaxy,” said SETI Institute’s Douglas Caldwell, who presented the information at the American Astronomical Society meeting today. “We’re not only closing in on an Earth twin, we’re better understanding the diversity in this special neighborhood.” While these planets are promising candidates for harboring life, said co-author David Kipping of Harvard in a statement, “We don't know for sure whether any of the planets in our sample are truly habitable.” Still, doubling the number of Earth-sized rocky worlds that might harbor surface water is a great start to finding those truly habitable planets.