Einstein's theories have changed how we see and interact with the world. Through Einstein's letters and quotes, we get to meet the man behind the equations and see what made him tick. 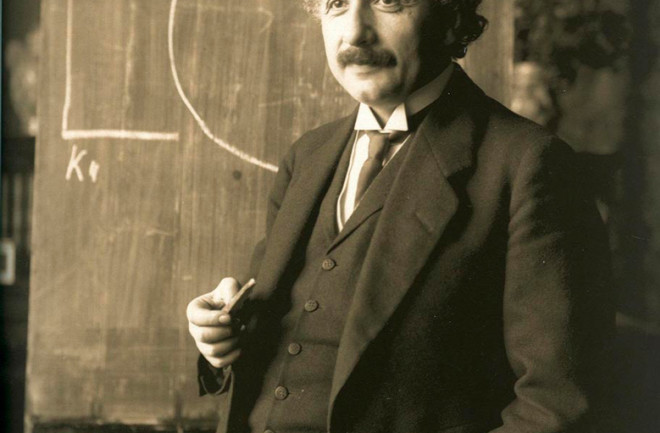 You could say Albert Einstein was our first pop-star scientist. Early in the 20th century, his two theories of relativity, which proved our perception of the world was far from reality, kicked off his catapult to fame.

When a photograph of the 1919 solar eclipse proved that light could bend, as Einstein predicted, that fame only grew. Few in the general public understood his scientific ideas, but they knew they were witnessing brilliance at work.

“Einstein’s Universe” brings to life Einstein’s thoughts — not only on science and his times, but also on creativity, children, religion and music. Dozens of quotes from his writings and speeches, paired with images, capture his early life in the late 1870s in Germany, through his time in Zurich and Berlin, to his final 20 years at Princeton.

Einstein did things his way: Who renounces his country’s citizenship in protest at age 17? Who works six days a week at a patent office while writing four seminal papers that change the field of physics in one year? Who is so sure he’ll win the Nobel that he includes the presumed prize money in negotiations with his estranged wife? Who eschews socks when meeting the president at the White House?

Consider this: At just 26, Einstein published what are deemed his most important scientific works, establishing that mass, energy, speed and distance are crucial to understanding the universe’s rules. His theories of 1905 are the bedrock of modern physics.

But in the midst of many more scientific publications along the road to his Nobel Prize in 1921, his marriage fell apart, he saw little of his boys, and he married his first cousin.

The U.S. hooked Einstein on his first trip in the early ’20s, when he delivered four lectures at Princeton. He eventually called the campus town his home when he began teaching at the Institute for Advanced Study in 1933. The institute focused on the intersection of the sciences and humanities — a perfect place for Einstein, who was more artistic than you might think. He reveled in playing his violin each day.

Curiosity drove his work and his pursuit of life — curiosity about how the world works (literally) and how we fit into it, at scales ranging from the galactic to the infinitesimal. It’s that vast place in between where most of us live, and it’s here that he sought to tamp down militaristic nationalism in favor of democracy and peace.

War shaped Einstein’s life, from his fierce pacifism after witnessing the Nazis’ rise to power to his early advice to FDR on developing atomic energy as a potential weapon. In his last signed letter in April 1955, Einstein added his name to a manifesto pushing for nations to abandon nuclear weapons. He died just a week later.

Today, his legacy is evident in everyday life, far outside the labs of physicists — from cell phones and satellite communications to nuclear power plants to medical scanning devices. And Einstein’s superstar status lives on, more than 50 years after his death.

Einstein’s life was hardly a straight line; you might say it curved right along with space-time. And who is best to make sense of it all than the man himself, in his own words?

NOTE:Alice Calaprice’s The New Quotable Einstein (2005, Princeton University Press) was an essential source for this special issue. All quotes are used with permission, and credits, unless noted, are attributed to Calaprice’s third edition of Quotable Einstein, published on the 100th anniversary of the special theory of relativity.