Ecuadoran Volcano Erupts for the First Time Since the '40s 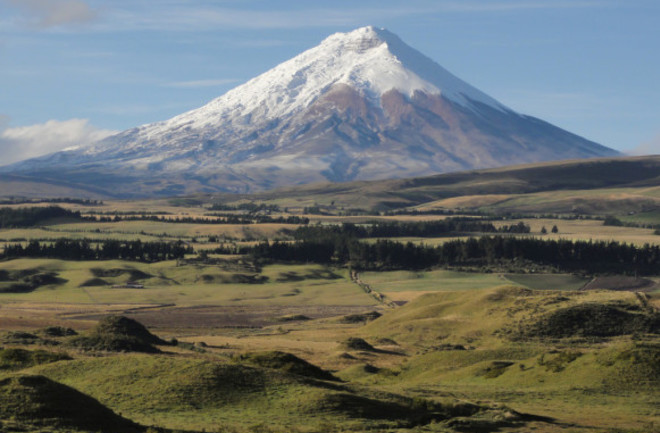 A view of Ecuador's Cotopaxi in 2011. Dave Lonsdale / Flicker | CC by 2.0 Ecuador was greeted this morning with a coating of ash from Cotopaxi. This eruption would be its first since explosions rocked the volcano in 1940 and possibly 1942. Today's eruption was quite small---two explosions that rained ash (see below) on the southern edge of Quito. Climbers on Cotopaxi heard the explosions in the early morning hours, both of which happened after earthquake swarms over the past few days.

At this point, little is known about the eruption characteristics, although at first glance, these appear to be steam-driven (phreatic) explosions of old lavas

at Cotopaxi's summit. Volcanologists from the Instituto Geofisico

will fly over the summit later today to see what might have changed. However, phreatic explosions like this could lead to more activity if magma is rising up under the summit crater ... or they might not lead to anything.' Right now, government officials are telling people to use precautions when venturing outside to avoid inhaling ash, but no evacuations have been called. Cotopaxi needs to be closely monitored as eruptions in 1877 produced lahars

(mudflows) that travelled over 100 km from the volcano. You can watch Cotopaxi on the IG webcam

. UPDATE 12:45 PM EDT: It looks like Cotopaxi is continuing to have explosions---check out the recent Tweet with a shot of the growing plume.

Ecuadoran officials have also closed Cotopaxi National Park due to the heightened activity.