Eclipses and their unsettling darkness have long inspired fear and awe — the precise reason some seek them out. 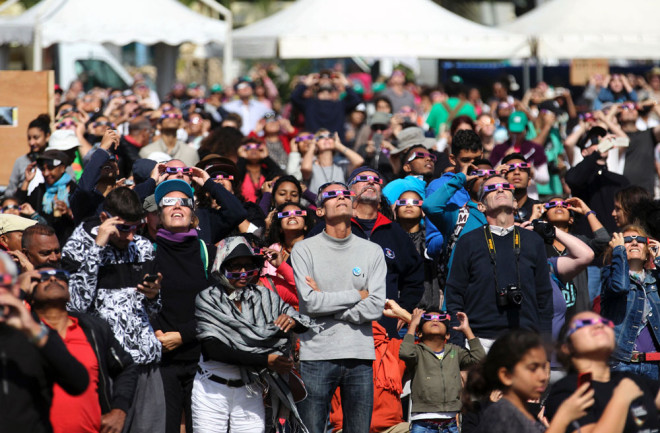 A crowd on the island of La Reunion, east of Madagascar, checks out the 2016 annular eclipse with dark safety glasses. (Credit: Richard Bouhet/Getty Images)

This August, the sky will dim until the daytime world becomes dark. The bright disk that usually lights everything, burns skin, feeds plants and tells animals when to sleep will become a blank circle, surrounded by the shifting haze of its atmosphere.

This scene will pass over the United States, from Oregon to South Carolina, potentially capturing an audience even larger than the Super Bowl. And these people — including you, I hope — will likely react emotionally, not scientifically. It’s a human response that has played out for millennia, but one that humans have begun to study only recently.

The moon is the same size as the sun in the sky and can, sometimes, pass in front of it in the ultimate cosmic photobomb. For many centuries, that light show mostly seeded thoughts of disaster and destruction — something, or someone, sinister was putting on a show of power.

In China, it was a dragon. In Hindu tradition, it was a severed-head demon called Rahu — but if humans made enough noise, Rahu would run away, resulting in a partial eclipse. Other cultural explanations also empowered people to bring back the light. Chippewa Indians let loose flaming arrows toward the sky, intending to reignite that life-giving orb.

And you know what? It seemed to work. The sun always returned.

But that didn’t change humans’ animal reaction of fear, which dogged eclipses into modern times. David Baron, author of American Eclipse, experienced that sensation when he saw his first solar disappearing act.

“I’m a very scientific person, a very logical person, not a spiritual person,” he says. He didn’t expect to be so moved. But when the sun left for a few minutes, his perception of his place in the universe, which he’d always known intellectually to be small, registered that way emotionally. “You can look with the naked eye at this completely alien sky,” he says. “I felt like I was transported to another planet, but I knew it was Earth. It was just an Earth I’d never been on before.”

In the 19th century, eclipses became a purely scientific pursuit. But as travel became cheaper and easier, more people were able to experience, even chase, eclipses. Those tourists shared their experiences back home. And then came the internet, which spread that knowledge across the globe.

The 2013 total solar eclipse in the African nation of Gabon showed off the sun’s wispy corona — literally an otherworldly show. (Credit: Miloslav Druckmüller and Constantinos Emmanoulidis)

During an eclipse that crossed the Faroe Islands in the 1950s, people scurried to get their laundry off the clotheslines — they feared it’d burst into flames. By the time another eclipse appeared in 2015, the clothes, and the islanders, were outside to see it.

Keep in mind, “not feeling fear” is not the same as “not feeling.” Psychologist and author Kate Russo studies people’s reactions to eclipses, and she’s found empirically what Baron learned anecdotally: Savviness doesn’t keep you stoic. “Even though we have scientific understanding of things, it doesn’t take away the fact that we are still animals,” she says.

In her surveys of first-time eclipse viewers, she sees the same emotional roller coaster, ridden again and again. People believe they are prepared. Then, when the object that keeps them alive and has watched over them for decades suddenly disappears — when that most solid knowledge is capsized for a few minutes — they feel unmoored like those poor saps with no scientific explanation.

It flies in the face of every sun we’ve seen rise and set. “If this can happen, what else can happen in life?” Russo says. “It’s the sense that your trust in how things happen can be challenged in a way it never has been before.”

It’s not for nothing that the English word eclipse comes from the Greek term for abandonment. In those moments of darkness, viewers must recalibrate their sense of constancy and realize that they live in a universe with big, round celestial objects. Most of the time, earthlings can ignore those objects.

When Russo surveys veteran eclipse chasers, she finds that they know that unmooring is coming, and they welcome it. They want the universe to put them in their place.

Another safe way to view an eclipse is through a homemade viewing box, as these Denver students did in 1979. (Credit: Ernie Leyba/Denver Post/Getty Images)

This month, millions of people will experience that perspective together, and share that with millions, perhaps billions, more online. A huge swath of humans will feel their spot in the universe shrink. And just like any cultural event that unites the people who experienced it together — from music festivals to football games to elections — humans will feel their connection to each other expand.

Sarah Scoles is a science writer in Denver. Her previous article for Discover was about why exoplanets are still cool.

Get Curious at a Science Festival this Spring