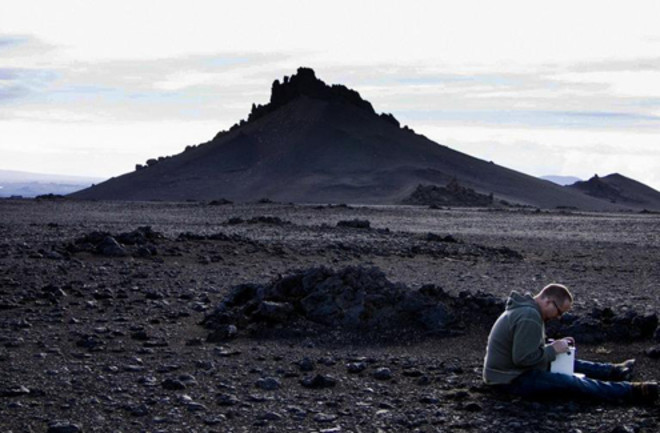 The volcanic wastelands between Barðarbunga and Askja in Iceland, seen in 2012.

Dave McGarvie, used by permission. It has now been over 4 days of intense seismicity at Iceland Barðarbunga, located under the Vatnajökull ice cap. The latest report from the Icelandic Meteorological Office (IMO) says that over 2,600 earthquakes, most less than M3, have occurred since the morning of August 16. The activity has shifted in its focus (see below) and is now primarily under a part of Vatnajökull that is ~600 meter thick, so any eruption would have a lot of ice to melt when the lava reaches the surface. This likely means that it would be a long time before any eruption would be noticed on the surface of the ice cap - instead, it would be glacial outburst floods (jökulhlaups) that would herald the start of the eruption. If the eruption never breaches the surface of the ice cap, there is the potential of a new tuya forming under the ice, where lava forms a broad, flat-topped mountain. Beyond the seismicity, we've also seen deformation around the focus of the earthquakes, suggesting magma is filling in below and needs to make space by moving the Earth's surface. IMO says most of the seismicity is occurring at depths between 3-7 km but there aren't signs yet that the magma is moving to shallower depths, so we still could see this all end as merely the intrusion of magma rather than an eruption. The alert status for Barðarbunga remains at Orange.

The location of earthquakes near Barðarbunga, color-coded to time (blue is earlier in the day, red is later - see hours marked on scale to right).

Iceland Meteorological Office. If you want to see what some of the potential scenarios, be sure to read Dr. Dave McGarvie's article. Also, there are now two webcams pointed at the Barðarbunga area, so you can keep an eye on it if any potential eruption manifests at the surface: Mila and Mogt.is. You can also see some realtime earthquake data in 3D (note: I can't guarantee the accuracy of this model and more recent earthquakes do not have accurate depths until they have been examined) on this interactive page.