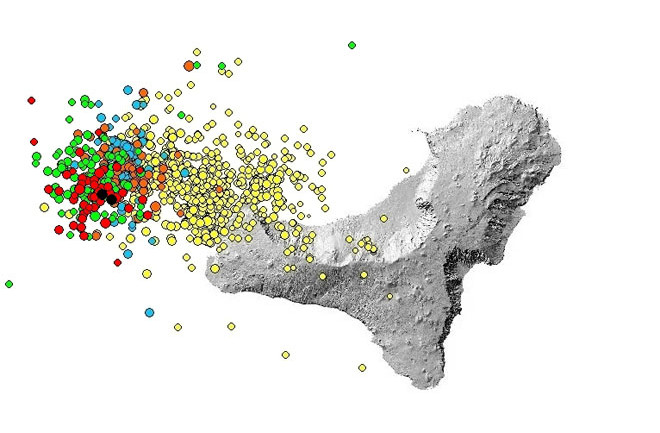 A plot of the recent swarm of earthquakes at El Hierro in the Canary Islands that began around March 18, 2013. This swarm is located off the western shore of the island, rather than the southern tip where the 2010-12 activity was centered. Image: AVCAN. Over the last few weeks, many people have been noticing a sharp increase in earthquakes under El Hierro in the Canary Islands. If you recall, in 2010-12, the volcanic island was the home of an offshore submarine eruption that produced some stunning drifts of volcanic tephra and floating "coconuts" of inflated sediment coated in lava. That eruption (in the broadest sense) lasted until March 2012 and since then, beyond some minor earthquake swarms that didn't lead to any new eruptive activity, life has gone back to normal on El Hierro.

Histogram of the recent earthquakes at El Hierro, showing the sharp increase after March 18, 2013. Image: AVCAN. Well, now it seems that magma is clearly on the move underneath the island once again. AVCAN has been tracking the seismicity and there have been hundreds to thousands of small earthquakes under El Hierro at depth of 10-20 km since March 18 (see right). However, the most interesting news is the sharp inflation the island has been experiencing, with ~10 cm of uplift in the westernmost part of El Hierro in only the last 10 days, near the focus of the earthquakes. This location of uplift and seismicity is very different than the 2010-11 activity (see above), which was centered to the south of the island. There has been no signs of undersea eruptive activity so far, according to scientists on the

a research vessel in the waters off of El Hierro. As of today (March 26), PEVOLCA, the emergency management body on El Hierro, is keeping the alert status at Green as they believe that the current unrest is not a danger to anyone on the island. As we saw during the last submarine activity at El Hierro, the real hazard was to fisherman who ply the waters around the island. I'll have more updates as they arrive.

{Special thanks to David Calvo for keeping everyone appraised on the activity at El Hierro.}