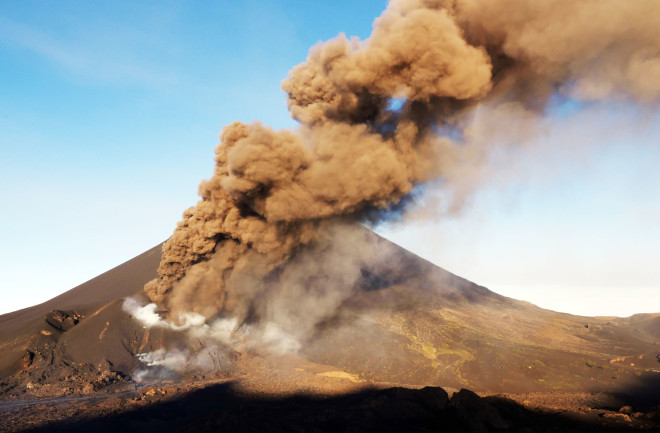 An ash cloud forming at Pico do Fogo volcano on Cape Verde Islands in December 2014.Marc Szeglat/AP Updates on some eruptions across the globe this week: Cape Verde Islands: Earthquakes on Brava in the Cape Verde Islands noticed on August 1 have prompted a heightened alert and evacuations of over 300 people from the slopes of the volcano. Brava has no known eruptions in the past 10,000 years, although many of the cones and flows on the volcano look relatively young. Based on its location in an oceanic island chain (like Hawai'i), you might expect lava flows from Brava. However, some of what are thought to be the most recent eruptions are phonolite, which is a stickier lava with higher silica content that can produce explosive eruptions. Combine that with interaction with groundwater on Brava, and we could see an explosive eruption. Only two years ago, Fogo in the Cape Verde Islands had one of its most specular eruptions in decades, with lava flows that overran multiple villages. Indonesia:Rinjani on the Indonesian island of Lombok had an unexpected explosive eruption on August 1. The eruption came from the Barujari crater inside the Rinjani caldera, the source of most of the activity at the volcano over the last few hundred years. Interestingly,

BNPB spokesperson Sutopo suggested that a nearby M5.7 earthquake was the trigger of the eruption at Rinjani. The eruption itself produced a plume that may have reached as high as 10 kilometers (32,000 feet; see below).

The ash plume from Rinjani in Indonesia captured by SNPP/VIIRS on August 1, 2016.NASA This area is heavily traveled by aircraft, so the eruption caused flight delays and cancellations across the region. By August 2, air traffic had returned to normal, but eruptions from two other Indonesian volcanoes, Gamalama (below) and Sinabung, were creating new hazards to aircraft. Hikers have also been warned to stay at least 1.5 kilometers away from the active vent area at Rinjani and all three volcanoes are on a heightened alert status due to the activity.

in Alaska took a short break before ramping back up

. Increased steam emissions and earthquakes at Pavlof suggest that a new eruption could be in the works. A weak thermal signal has noticed at the summit, but poor viewing conditions mean that direct observations have not been made. UPDATE 7 PM EDT 8/4: As soon as I posted this, AVO lowered the alert

to Yellow. Speaking of which, the Alaska Volcano Observatory announced that the webcam pointed at Cleveland volcano

has been fixed, so now (when it's not shrouded in clouds), you can check out this restless Alaskan volcano. Mexico:Popocatépetl

continued its rumblings, with ash coating areas of Mexico City

, over 50 kilometers (30 miles) from the volcano. Some of the ash fall was so intense

that dust masks were required and plans were created to remove the accumulation of ash from streets and roofs. You can check out the activity at Popocatépetl on the webcams: Webcams de Mexico

. If you're in the mood for a historic eruption, check out this (overly dramatic) old newsreel

about the 1942 eruption of Parícutin